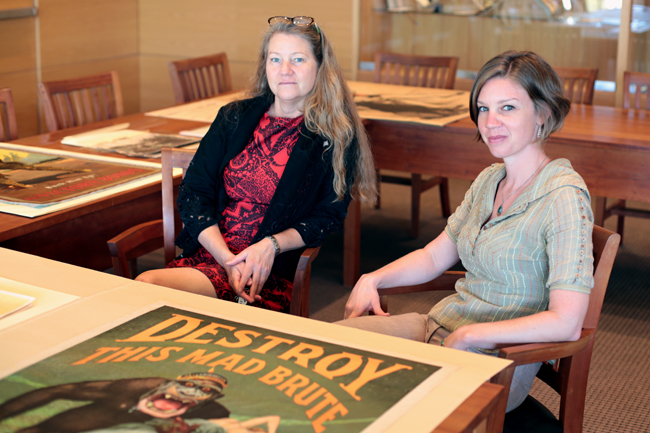 Co-curators Elizabeth Garver and Jean Cannon have curated a collection of World War I posters, photographs and letters that will be on display at the Harry Ransom Center’s upcoming World War I exhibit next February. " />

Co-curators Elizabeth Garver and Jean Cannon have curated a collection of World War I posters, photographs and letters that will be on display at the Harry Ransom Center’s upcoming World War I exhibit next February.

As fall approaches, students and curators at the Harry Ransom Center are wrapping up work on an upcoming World
War I exhibition.

The exhibit is titled “The World at War, 1914-1918” and highlights the lives, loves and literature of those who lived during the “war to end war.” Drawing on the Harry Ransom Center’s extensive in-house collection, the exhibit brings together a collage of various genres of literature and photography to portray the war from the perspective of civilians and soldiers.

Plan II senior Elizabeth Barnes spent her summer as an undergraduate summer intern at the center preparing an audio tour and accompanying booklet for the World at
War exhibition.

She said her experience at the Ransom Center was enriching and eye-opening; The
internship allowed her to comb through archives of photography and literature, selecting and compiling pieces to create the Harry Ransom Center’s first audio-visual tour.

“The Harry Ransom Center hadn’t done an audio tour, so I had a lot of latitude to develop a new experience,” Barnes said.

The tour features voice work of actors from the London Stage,
Barnes said.

Jean Cannon, a literary collections research associate, said the center has a great collection of propaganda from the British, German and Russian governments during that
time period.

“I don’t think we show all the German propaganda, especially the music, because … it’s in German,” Barnes said. “But, it’s fascinating to see the connections between it and a lot of our own music today. Those are the kinds of things that you really only see behind the scenes working at the
Ransom Center.”

There’s a certain
sobriety about working on an exhibit like this, Elizabeth Garver, a historian and research associate at the Harry Ransom
Center, said.

“World War I was the first war that was industrialized and mechanized,” Garver said. “The romance and glory of hand-to-hand combat is gone, and what’s left is a lot of the sadness and horror.”

Cannon said there are points of light, even humor, in the literature. Letters from soldier-poets could be grittily sarcastic, a tone they sought to keep while working with minimal space on postcards and censorship from military officials.

“The soldiers would circulate parody newspapers making fun of the goings-on and some of those can be terribly sarcastic and funny,” Cannon said.