Local garage band makes its own mark in Austin 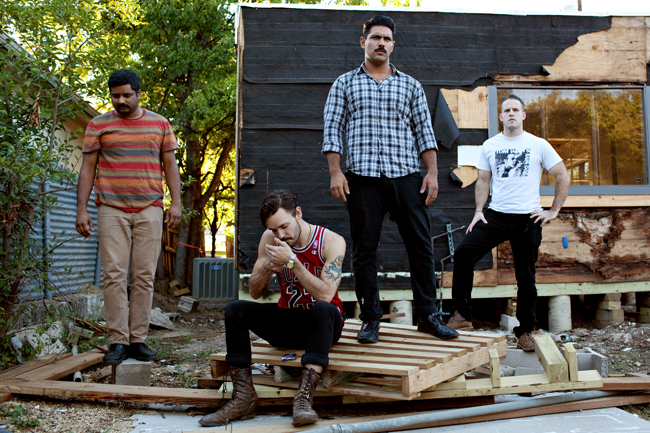 GLOVES can be explained in three words: charismatic dungeon funk. Four longtime friends and veterans of Austin’s garage rock scene formed GLOVES in July but are already working to make a mark.

Ajit D’Brass, Colton May, Ben Fisseler and Salem Abukhalil have known each other for almost 20 years, and have played with other local bands such as Act Rights, Kay Leotard and Brute Force. When all four members are together, they joke and play off each other with the ease of a performing improv troupe, the bond between them easily translating into a charismatic live show.

GLOVES formed as a reaction to the garage rock scene in Austin. There is a homogeny to the music, the band said, and no matter which venue you go to, it’s the same bands playing the same songs they played the week before. They didn’t see musicians trying to explore and elevate their art.

“It’s a reaction to the stuff we’ve been hearing for a long time in this town. And we feel that we can do this, but we can do it a million times better so show them how to do it, be technically good musicians and make it obvious through our live show,” Abukhalil said.

Describing GLOVES’ sound is not an easy task, the band cites dozens of genres when asked for their influences; which range from African music, jazz, blues, disco, rock n’ roll, funk and electronic, to name just a few. The blend of so many musical influences results in a heavy, raw style, accompanied by serious funk.

Garage rock emerged as a genre in the 1960s, and occupies a space somewhere between rock n’ roll and punk on the musical spectrum. According to Josh Brown, member of local bands The Sugar Queens and 144,000, garage rock came out of a bunch of people in the US listening to The Beatles, grabbing onto the simplicity and amping up the energy. They made songs that were like simple pop songs, but more noisy and raw.

“The simplicity is the core of it.  It’s an outgrowth of folk music, simple chords, simple songs, the same structures over and over again,” Brown said. “The basic idea is anybody can do it, tap into the sound and put your own spin on it.”

In a city where there are hundreds of live shows a night, it can be a daunting task to find a band that sounds different.  GLOVES hopes to inspire others to go out, explore and create in whatever way they want.  For students, especially those who aren’t familiar with Austin, they gave some advice.

“I think that there’s enough music in Austin that you can find anything. If you like dance music, you can find where it’s going on and just go, find a buddy, go out, don’t drink. Take a curiosity pill,” D’Brass said.

GLOVES are currently recording their first album, due out in early 2014, and will play on Oct. 16 at Cheer Up Charlie’s.