HAIM’s debut album almost lives up to the hype 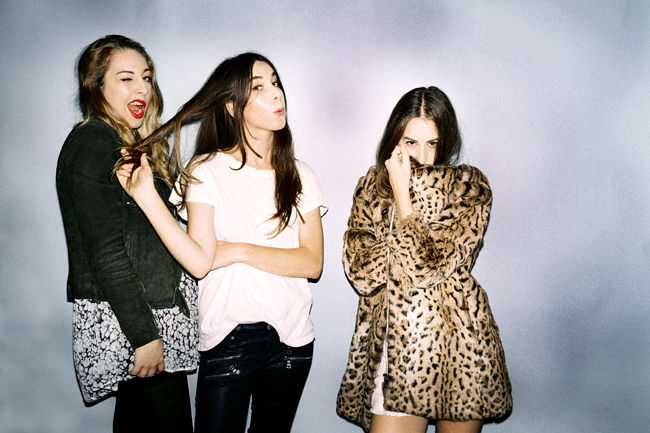 If you don’t know much about the band HAIM (pronounced like “time”, not “tame”), you are likely to hear a ton about them in the upcoming months. Compared to Fleetwood Mac and Wilson Phillips, this Los Angeles-based band, made up of the three Haim sisters and drummer Dash Hutton, made waves earlier this year with infectiously catchy singles and buzz-filled performances at South By Southwest. From there, the band booked opening slots for Vampire Weekend and Phoenix, made a stop at nearly every major summer festival and is scheduled to play at this year’s Austin City Limits Music Festival. Now HAIM has released one of the most anticipated debut albums of the year.

HAIM smartly arranged all the powerhouse singles at the beginning of Days Are Gone, delivering a powerful trio in the groovy “Falling,” the sublimely smooth “Forever” and the energetic and downright amazing “The Wire.” The singles are mainly structured around the hooks delivered by singer Este Haim’s powerful voice, accompanied by the ’90s rhythm and blues sounds that at points echo Destiny’s Child and TLC. This pattern of ’90s R&B meets indie rock comes together perfectly on “The Wire,” which builds up to greater heights on each chorus.

Other highlights include the more restrained “If I Could Change Your Mind” and the blistering pop anthem “Don’t Save Me” later in the album. There are definitely moments of filler around the middle of the album, which show that the band doesn’t quite have the knack for appropriating R&B, ’80s pop and indie rock the way that contemporaries, such as Chairlift, do. That’s not to say there isn’t promise or innovation here, as is most exemplified by the later album standout “My Song 5.” The track is defined by an aggressive bass line and off-kilter beat that shows the band’s more aggressive and electronic side in a fascinating way. It makes for an electrifying moment that provides a much-needed diversion from the pattern that Days Are Gone falls into in the second half.

The greatest lesson that can be taken from HAIM’s debut is that the group is at its strongest when it indulges more toward its ’90s pop sensibilities. Days Are Gone is a slightly formulaic and predictable debut, but is also a highly enjoyable one that expertly captures the fun and carefree vibes of summer. Fans of carefree pop music will find much to enjoy with this charming, if slightly uneven, album.