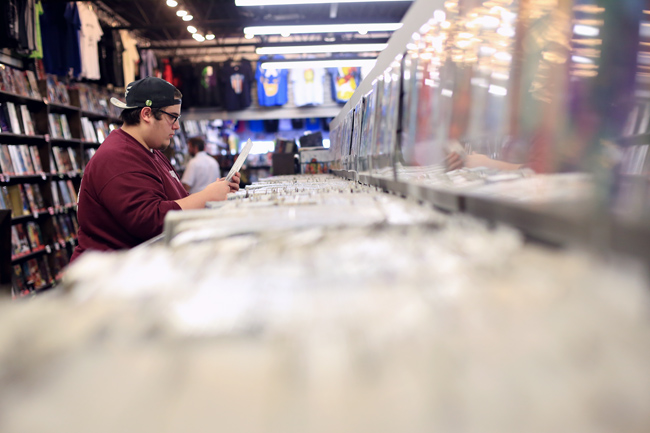 The general impression of the comic book reader in American society has largely been a negative one: an overweight mouth-breather whose pride in memorized minutiae is only matched by his cruelty to the uninitiated. Even in a city like Austin, where a seemingly infinite number of alternative cultures thrive, comic books have occupied a niche market many assume is comprised entirely of people like “The Simpsons” Comic Book Guy.

Until now, that is. In the wake of the massive success of superhero films, comic book readership has increased dramatically, crossing social barriers and improving sales.

Zach Martin is the creative director of Dragon’s Lair Comics & Fantasy, one of the largest comics and games stores in the nation. Dragon’s Lair opened 27 years ago and has grown from operating out of a small house to its current facility on West Anderson Lane. Dragon’s Lair sees a mix of customers from all demographics, from families with kids on Saturday mornings to people who walk in while shopping nearby, Martin said. He also described the clientele of the new location as surprisingly diverse.

“We don’t have a set demographic,” Martin said. “For a while, it was easy to pinpoint people who found us because they were looking for a comics store. Now, people just wander in.”

And not only do they wander in, but they keep coming back. Martin contributes this surge in interest to the string of successful super hero movies released in the past five to 10 years.

Brandon Zuern is the manager of Austin Books & Comics on Lamar Boulevard, another Austin mainstay that has been around for 36 years. Zuern agreed that big budget comic book movies have played a large part in the increased interest in comic books.

“‘Iron Man,’ that was a big deal,” Zuern said. “After that first movie came out, people loved it. We had a lot of people coming in then. We had new people coming in. We had kids wanting ‘Iron Man’ figures and comics.”

This boom did more than just boost sales of “Iron Man” paraphernalia.

“I think there used to be that stigma, that stereotype of what the comic reader looked like or sounded like or acted like,” Martin said. “But now, people you wouldn’t necessarily pinpoint as a comic reader say ‘Hey, I saw “The Avengers” for the first time, can you point me to some titles? I just want to read more.’”

Faires said her dad first introduced her to superheroics, and — in accordance with his tastes — she exclusively read DC Comics for most of her life.

“The first real experience I had with Marvel was watching ‘Iron Man,’ and I loved it … it turned me on to this whole other universe I’d never even looked at before,” Faires said.

Faires said that above all, it was the touches of realism in Marvel’s movies and comics that converted her.

“I love the way ‘Iron Man’ and Marvel comics in general engage with the real world,” Faires said. “Their stories take place in real cities — the movies have clips from real television personalities. That was such a breath of fresh air.”

Thanks to the influence of movies such as “Iron Man” and “The Avengers,” comic book readership is transforming from a symbol of difference to one of coolness.

“The movies are the gateway drug,” Martin said. “They’re a way of bringing people in and showing them that comics are for everybody.”

But returning to the same franchise too many times can be met with diminishing returns.

“If it’s yet another Batman movie, that’s not going to sway a lot of people to comics,” Zuern said. “By the third or fourth X-Men movie, they’ve already got all their new fans.”

Despite this, Austin’s comic stores are filled with a mix of new readers brought in by film or television adaptations, former fans looking to pick up titles again and unwavering enthusiasts who have been subscribing to titles since birth.

“We’ve got males, females, all races, creeds,” Zuern said. “I’ve got UT student customers. I’ve got UT professor customers. I did not know that comics were enjoyed by as wide a piece of humanity as it is until I moved to Austin.”