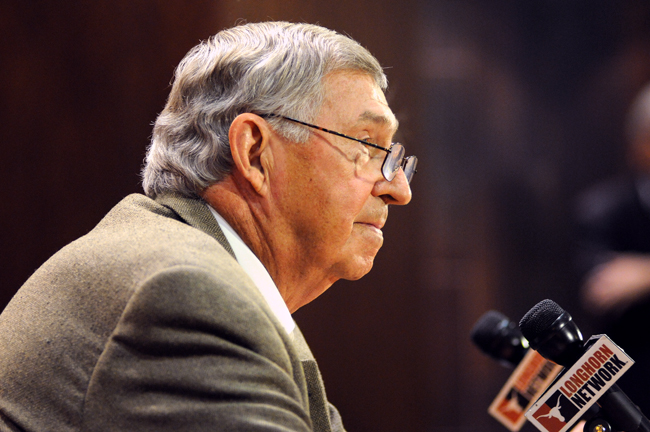 DeLoss Dodds announces at a press conference held October 1 that after 32 years, he will retire August 31, 2014.

In a swanky suite nestled in a stadium he’s transformed, DeLoss Dodds announced he will retire from the men’s head athletic director post at the end of August.

Dodds said he is retiring after 32 years on the job because he wants to spend time with his wife, Mary Ann Dodds, travel and experiencing the world.

“[Mary Ann] and I need to go to Tuscany,” Dodds said. “We need to see the leaves turn. There’s a lot we have to live because we haven’t lived because we’ve worked.”

But the announcement comes in the middle of a 24-18 football record over the past four seasons, well below normal program standards. By announcing his resignation early on, Dodds said he hopes to facilitate a smooth transition into new leadership.

Though the University has not been in contact with any potential replacements, the hunt for a successor to Dodds is currently underway.

“With the assistance of Dodds, we will begin the search for a successor today,” President William Powers Jr. said. “People around the country have enormous respect for UT and its athletic department. I have no doubt this will be a highly sought-after job.”

Head football coach Mack Brown said in a press release that Dodds had an unparalleled influence on the athletic department at UT.

“[Dodds] has been the best athletics director in the country for a long, long time and built a model athletics department here,” Brown said in the statement. “He is absolutely as good a boss as anybody could ask for, and he really cares about the coaches, kids and everybody in all of our programs.”

Dodds said the reality of his decision has yet to set in.

Powers said Dodds had a significant impact on campus and the athletic department.

“Over the last three decades, our teams have not only won conference championships and national championships, but they have produced the highest quality of student athletes who, like [Dodds], embody all that is great about our University, the state of Texas and college sports,” Powers said. “He laid the foundation for generations of Longhorn athletes to come.”