DeLoss Dodds a quiet giant at the University of Texas 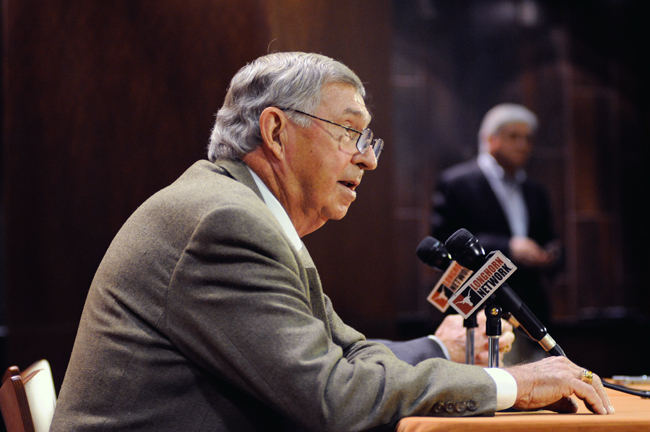 DeLoss Dodds spent most of his time in the background during his 32-year tenure at Texas, making deals and silently elevating the program. His steps were quiet; the shadow he cast, anything but.

The University hired Dodds as the men’s athletic director on Aug. 14, 1981, and just over 33 years later, he will step down from the position. It’s a dose of consistency for a man who was defined by it. In Dodds’ time at Texas, he steered the Longhorns to 14 national titles and 108
conference championships.

“DeLoss’ vision reshaped UT-Austin,” UT President William Powers Jr said. “It reshaped college athletics, the entire NCAA. DeLoss, let me say, it has been an honor to work with you, to call you my friend.”

Dodds, a former track coach, arrived at Texas from Kansas State in 1981 and spent the next 32 years nurturing a
blossoming economic and athletic empire. At the end of 2012, the athletic program raked in $163 million in revenue, No. 1 in college sports by more than $21 million.

Texas’ athletic department is a self-funded revenue giant. Dodds ensured his student athletes had the best equipment and treatment possible, all the while funneling over $400 million to the University for facilities in his time as athletic director.

He led Texas through multiple rounds of conference realignment that transformed the landscape of college football. Dodds engineered the school’s 20-year, $300 million deal with ESPN to create the Longhorn Network. The station is a huge asset for the school and an unprecedented recruiting edge.

Numbers define Dodds’ tenure, but it’s his lasting relationships with the student athletes and facility that will pave his legacy.

McWilliams remembers the wake of the Longhorns’ 31-14 loss to Texas A&M in 1991, dropping Texas to 5-6 on the season. The coach was invited to Dodds’ house for dinner after the game, like he was after every season, to discuss the year and McWilliams’ job status. After the talk, McWilliams knew it was time to step down, but he never
felt pressured.

“I never had to worry about DeLoss,” McWilliams said. “He was upfront, and if it was time for me to step down, he would do it in a way that was first class.”

Former Texas shortstop Jordan Etier, who patrolled the middle of the Longhorn defense from 2008-2011, would see Dodds at practices and games 15 or 20 times a season. Etier remembers the team running extra hard in sprints when Dodds came around because they wanted to impress the man.

“He cared about winning, don’t get me wrong,” Etier said. “But he really wanted to help us develop as a person. He really cared about us, and the life we’d have after UT.”

Each of those coaches were hired in a two-year span and Dodds has shown an impressive knack for finding and keeping some of the best coaches in the industry. Perhaps that’s because of the way he treats them. Cliff Gustafson, Texas’ baseball coach for 29 seasons and a two-time national champion, remembers his first interaction with Dodds fondly.

“When I first met him, he told me that he knew I was the best baseball coach in the country,” Gustafson said. “Well, from that moment on, I thought he was a pretty good guy.”

James Vick, an ex-officio facility representative on the Men’s Athletic Council, was one of seven people who originally interviewed Dodds for the athletic director position. The interview took place in a basement of Dallas/Fort Worth International Airport, and Vick knew right away Dodds was the man for the job.

“I had no idea the impact he would have,” Vick said. “It’s impossible to duplicate individuals, and it’s hard to say you can get another person to do what he’s done.”

Dodds is ready to move on and spend time with his family. He wants to see the country and take his wife to Tuscany. But even halfway across the world, Dodds’ shadow will remain, silently watching over the program.