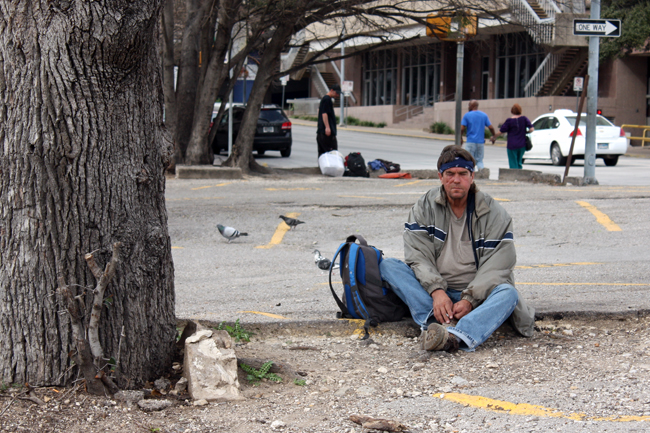 Carl Evans sits in a parking lot near Austin Resource Center for the Homeless on Sunday morning. The annual average of sheltered and unsheltered homeless in Austin usually rounds out to 4,500.

Walking down the Drag on any given day, you’re almost certain to come across multiple homeless individuals lying on the sidewalk, sitting outside store windows or just roaming the streets. This phenomenon is not unique to our campus. Take a drive through Austin, and you’ll notice something similar: people holding up signs at traffic lights asking for money, food or both. Neither is it something exclusive to our city. On a single night in 2012, there were 633,782 homeless people in the United States, according to the 2012 Annual Homeless Report to Congress.

But our encounters with homelessness have become so constant that the issue has almost become part of the background — a constant sign of unending poverty that doesn’t seem to get any better.

And, when discussions do arise on the topic, the first question that comes up is whether or not we, as students, can even do something to help. After all, it seems as though all the programs we have in place so far (such as food banks and homeless shelters) haven’t been getting to the root of the issue; if they had, wouldn’t there be fewer homeless?

It turns out, though, that the issue is not so simple. In fact, the face of homelessness is very different from the perception of homelessness many of us have formed based on our daily street-side encounters. Children and families make up a large part of the homeless population — a fact that evokes a very different image than that of the often-scruffy, adult wanderers on the drag.

Garrett Olin, the HMIS Director at ECHO, a Continuum of Care program committed to the goal of ending homelessness, reiterated this fact. He said that one of the biggest trends he has noticed on the job has been the increasing number of homeless children and families in the past few years. This does not mean just single mothers with kids, but rather larger, four- or five-person familial units. Tiffany Ryan, a Ph.D. candidate in social work at The University of Texas who has done extensive research on homeless youth, noted a similar trend, saying that a lot of youth who find themselves homeless have come from abusive homes or failing foster care systems.

The 2012 report to Congress documented the increase as well, stating that homelessness among persons in families has increased 1.4 percent since 2011.

What’s the solution? For Olin, affordable housing seems to top the list. According to him, Austin has a real lack of it. A lot of homeless people have jobs, but due to high housing costs, they just can’t afford to pay rent.

Ryan agreed, pointing out that while shelters might be the go-to solution, they aren’t sustainable. “A lot of time people just say we need more shelters, but that’s really not what we need,” Ryan said. “Shelters are not places where people want to go, not long term. They can be scary places where lots of bad things happen. More transitional housing would help, more long term that would allow you to deal with issues within the housing.”

Affordable housing seems to top the city’s agenda as well. On Tuesday, Nov. 5, a special election will be held in which voters will consider a 2013 Affordable Housing Bond. According to the city’s website, the bond “allows the city to borrow $65 million to partner with organizations to utilize funds for affordable rental and ownership housing and preservation of existing affordable housing.” The money would also put on programs such as rental housing development assistance, homeownership programs, and repair programs.

On the other hand, Ryan noted that while housing is important, the best way to combat the issue at a systematic level is to focus on prevention. Once someone becomes homeless, it’s much harder to assist him or her. Prevention methods, on the other hand, would help remove some of the root causes. Such programs would include helping support families that are prone to child abuse, helping support families financially or through professional development training programs, and providing counseling and mental health services to adults, particularly to veterans returning from war.

But perhaps the most overwhelming challenge to eradicating homelessness is that the issue is tied in with an even more chronic one: poverty.

Even if someone finds a job, a question remains: “What kind of job will they get?” Ryan asks. “One on minimum wage. When we look at a living wage, it’s certainly not minimum wage. If you are earning a minimum wage, you are going to be living in poverty.”

Which brings us back to the first question. With a problem so large, do small-scale, one-on-one programs students participate in even make a difference?

Yes. Oftentimes, families on the brink of poverty have to choose between eating and paying the rent. That’s where a free meal from a shelter or free grocery shopping can make all the difference. By saving on food, families can divert their income to paying rent or utilities, helping them out of the cycle of homelessness.

Similarly, through affordable housing options, many of which offer community learning and counseling programs on the side, families can get back on their feet more quickly, and help reduce the duration of homelessness, a goal that Olin feels is more attainable.

Ultimately, every bit helps, especially since the true faces of homelessness differ from those perceived. Students should feel like they are contributing when they donate their time to food shelters or other non-profits that help the homeless. But they should also get educated about the Affordable Housing Bond, which addresses the issue at a policy level, and go vote.

Malik is a Plan II and business honors sophomore from Austin.