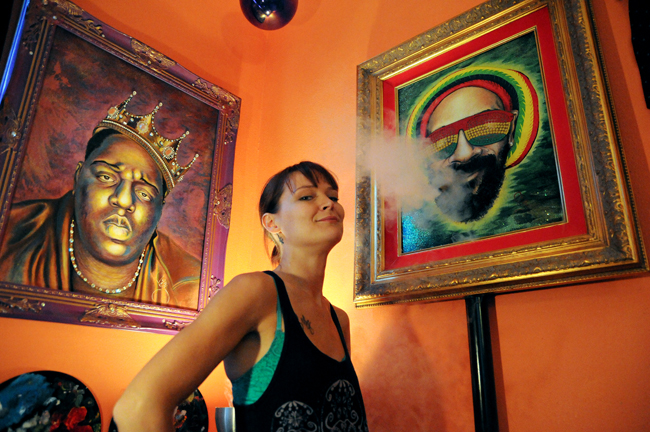 With a mix of artistic skill and technological savviness, Janis Fowler is making a name for herself in the art world. Her astonishingly lifelike portraits, mainly of celebrities, are infused with her whimsical sense of humor.

Although she shows much of her work in more traditional ways — on the walls of local restaurants including Trudy’s and Opal Divine’s — Fowler is using sites such as Reddit and Twitter to show her work to a much larger audience. Last week, her charcoal portrait of Bill Murray in a top hat and monocle was on thechive.com, which gets 750,000 views per day.

For Fowler, who is self-taught, it all begins with the eyes. At a bluegrass festival, she met a boy whose artistic skill impressed her so much she followed him around in hopes of learning from him.

“I was 6 and he was 11, and I’m sure he gave me the most basic of lessons, but I took it so to heart,” Fowler said. “He got me to start drawing eyes — human eyes — and I love them. They’re just so expressive, and they convey so much about a person’s kindness and emotion and coldness, just majesty. I thought if I could capture that, I would be home free.”

Using the people of Austin as her inspiration, as well as a bad-tempered rooster that often chased her when she was riding her bike, she began creating her first true series in 2012, Eastside Zoo. A raccoon in a plaid shirt holds a Pabst Blue Ribbon can while wearing oversized glasses. A cat with a dapper mustache and septum ring smokes a cigarette while wearing a cycling cap and bandana. All are done on locally-produced scratchboard.

“I thought I could make caricatures of these hipsters — they’re my friends and I love them,” Fowler said. “I’m just playfully making fun of them. I’m not trying to be mean at all. I would go down to Shangri-la and do field research, sit and drink some beers with a sketchbook and be like, ‘Look at this hipster right here,’ and write down what he was wearing and why is was so absurd, and then go home and think about it.”

Matt Moore, general manager of Opal Divine’s Penn Field, has had a tough time keeping up with the demand for Fowler’s works, especially the Eastside Zoo series.

“Some of Janis’s work won’t stay on the wall for more than a day,” Moore said. “People are always calling up and asking for new stuff from her, so I’m always harassing her for new stuff.”

After the Eastside Zoo series, Fowler turned her attention to celebrity portraits. Inspired by larger-than-life personalities, she mixes in unexpected elements to give humor and character to her creations.  “I wanted to do this series of large, elaborate portraits of hip hop artists, with an over-the-top, blinged out, tactile feeling,” Fowler said. “In this portrait of Snoop [Dogg], there’s a false chamber in the back, and some time this week I’m going to buy a fog machine, and hook that up. That straw in his mouth, I’m going to wrap in a blunt wrapper, and you flip it on and smoke starts blowing out of Snoop’s mouth.”

After she finished the Snoop portrait, Fowler uploaded a video of it in action onto Reddit. Social media gives artists a chance to show their work to a huge audience, outside the world of art galleries, where competition is fierce.

Mando Gonzalez is an artist and friend of Fowler’s who works at Jerry’s Artarama. He’s one of the people Fowler turns to if she needs advice.

“There’s more artists than there are places to show, a lot of the traditional galleries around town are just that, traditional,” Gonzalez said. “There are new and upcoming places, like the Canopy and the Pump Project Art Complex. Things are finally changing.”

Fowler earns about half of her income through the sale of her original work, prints and commissions, although art is something she would be doing regardless of getting paid.

“I don’t feel like I’m actually working, and I’m not, because I love what I’m doing,” Fowler said. “Although I put in a lot of work and a whole bunch of hours. Basically every day I wake up and ask myself ‘what do I want to make today?’ and then I make that thing.”