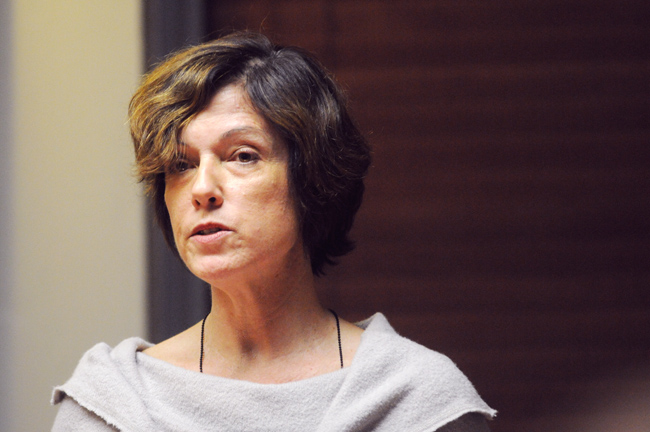 Journalist and Pulitzer Prize winner Anne Hull questioned the intersection of truth and the standards of journalism at a talk on campus Tuesday.

Hull, a reporter for The Washington Post, discussed her career in journalism as well as some of the specific stories she has covered, including topics of immigration, current journalism standards and race. Hull also explained how journalism students begin to understand what is defined as the truth.

“You are working in the frontier of journalism,” Hull said. “What is true and what portion of stories is true must be decided by
new journalists.”

Hull also discussed controversies over sexual orientation and young teenagers, specifically explaining the violence teenagers experience when they come to terms with their sexuality. Hull said her stories about gay
teenagers included spending extra time with the story and involving herself in the teens’ lives. She said that the details she includes in her stories are not always accepted
by readers.

“Journalism is when one leaves [one’s world] for someone else’s and does not focus on the cut-and-paste journalism,”
Hull said.

She said she gets people to trust her work through face-to-face interviews, as opposed to emails.

“I have learned that 60 percent of journalism is waiting around for the story and learning journalists need to see things for themselves,” Hull said.

Hull received the 2008 Pulitizer Prize for Public Service after covering the Walter Reed Army Medical Center’s treatment of wounded soldiers returning from Iraq and Afghanistan. She said the journalist’s job is to get the story, but sometimes the pressure of the story is hard to handle.

“In some stories,
nothing happens, and in others, events continuously
happen,” Hull said. “But one of the purposes of journalism is to work for someone who has the same ideals as the [journalist] and will pay them something for
their ideals.”

“Hull explained how our generation of journalists do not care about the truth but should consider focusing on it,” Biggs said.

“Hull’s stories challenge the simple narrative,” Valentine said. “She does not cover the liberal point of view or the conservative point of view, but the journalist point of view.”