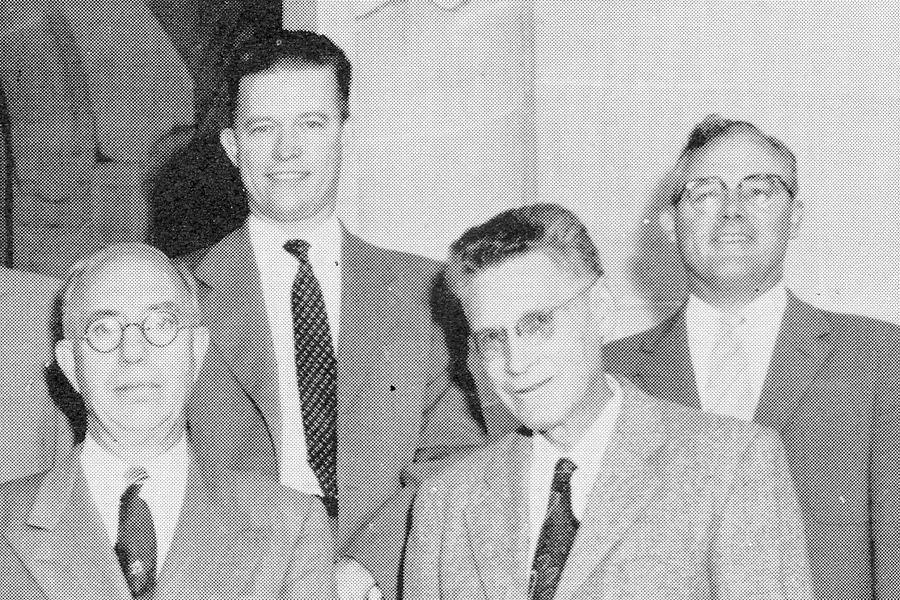 Pvt. E. Gartly Jaco, pictured third from the left, served as a sociology professor at the University in 1955. Before that, he made a name for himself as a columnist for The Daily Texan, advocating jazz as a legitimate form of music. " />

Pvt. E. Gartly Jaco, pictured third from the left, served as a sociology professor at the University in 1955. Before that, he made a name for himself as a columnist for The Daily Texan, advocating jazz as a legitimate form of music.

For many people, especially residents of the “Live Music Capital of the World,” jazz music is a familiar, and often welcomed, sound. On the streets of downtown Austin, one is sure to hear the smooth notes coming from a jazz band playing in a club or a street musician’s saxophone.

But in the 1940s, Austinites might have been surprised to hear those notes coming from anywhere at all.

The origin of jazz dates from the early 1910s, but it was still unfamiliar and unappreciated enough in the ‘40s that it prompted former Daily Texan writer, Pvt. E. Gartly Jaco, to write a series of articles about it, titled “Jazz from Jaco.”

Though it may seem strange to have had such articles printed alongside news about World War II, perhaps it was all the more necessary to shift the attention of
students to a topic such as jazz to remind them of the cultural movements also taking place at the time.

In his first piece, Jaco addressed four assumptions made about jazz by those he called the “followers of the old school of music.” The assumptions included jazz was “low brow, disconnected noise,” its “original conception was formed in immoral institutions” and should be shunned, it only appealed to adolescents and, in its best form, jazz could only be understood by musicians.

The article, published Sept. 1, 1944 — exactly five years after World War II had begun — hit each of those points, with Jaco’s fervor equal to that of any jazz musician’s today.

In the case against those who called jazz “disconnected noise,” Jaco said, “Laws of psychology prove that when a person cannot understand something, he either shuns it altogether or denounces it in some manner,” a statement many non-mainstream musicians today would likely agree with.

Jaco returned with his second article on Oct. 3, this time defining jazz for the “laymen,” though he admitted it “would be like attempting to depict art without illustration, music without notes, life without living.”

With these limitations placed on him, Jaco began to describe jazz.

“Originality and individuality is its keynote, emotion and phrasing is its medium of expression and syncopated rhythm is its basis,” Jaco said. “To be colloquial, jazz is democratic music.”

Jaco’s third article in the series, published Nov. 30, boasted a bright future for jazz in the post-war era, citing the success of many of the day’s jazz musicians, including Coleman Hawkins and Don Byas.

In addition to predicting the popularity of jazz, Jaco briefly discussed the differences between the musical talents of white and African-American jazz performers in the ‘40s, leaning heavily in favor of music produced by the latter.

“Past performances of mixed white and colored musicians in a jam session proved that the colored jazz artist is far superior and more advanced in his musical ideas than his opposing white performer,” Jaco said.

While Jaco’s opinion concerning the connection between race and musical talent might be taken with a grain of salt, the rise of artists such as Buddy Johnson and Dizzy Gillespie following the war and the continued popularity of jazz today reveal his predictions were on track.

In a city now known for the diverse genres that fill its clubs, bars and cafes, it is hard to imagine the need to make the case for the seemingly-classic jazz; but Jaco’s articles are a good reminder that even the classics had to face a little resistance.