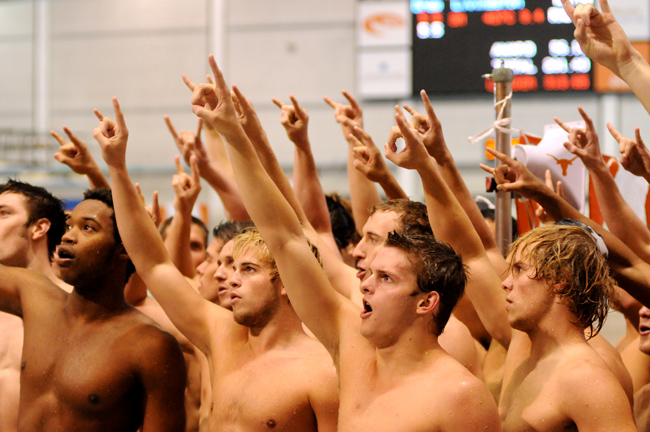 Texas men’s swimming and diving team jumped back in the pool last Thursday for its annual Orange-White meet. This normally friendly scrimmage featured a new aspect that looked to reinforce the team’s mantra of competition. Like a game of pick up, Texas’ seniors were given the responsibility of selecting the swimmers on their teams.

As the last meet rolled around, it became clear the orange and white teams were separated in the standings by less than 10 points.

As the anchor legs began their final lap, chants of, “Go” and, “Finish Strong!” erupted from the teams and were echoed throughout the complex by spectators. The white team came out victorious on paper 161.5 to 158.5, but as head coach Eddie Reese addressed his team, the focus shifted away from who won and who lost.

“One of the best meets I’ve seen,” Reese said. “We got the best out of everybody today. Seniors put together great lineups and it’s exciting but there’s a lot of hard work ahead.”

The meet was Reese’s first opportunity to see his freshmen in a competition and they didn’t disappoint. Freshman Michael Hixon claimed the one-meter diving event, fresh off an appearance at the FINA World Championship.

“The freshmen know it’s about swimming the entire distance,” Reese said. “Not just to the wall, but through the wall. To do well we must be a team from the first swimmer to
the last.”

The meet saw notable performances from junior Clay Youngquist, sophomore Sam Lewis and freshman Will Licon, who all posted two wins a piece in events for the
white team.

After the meet, Youngquist was pleased with the performances of some of his younger teammates.

“We saw what our freshman class was made of and they put up some good numbers,” Youngquist said.

Despite their promise, team coaches and veterans know the freshmen will need leadership to set the precedents of hard work in the coming months. Leadership will need to come from veterans such as junior diver Will Chandler who also performed well in his fourth Orange-White meet.

“They ask me questions all the time and I just try and give them the best answers,”
Chandler said.

The Longhorns open their season at home against North Carolina on Oct. 17.

The team may be coming off its 34th consecutive Big 12 title, but at Texas, only the National Championship banners are hung from the rafters.