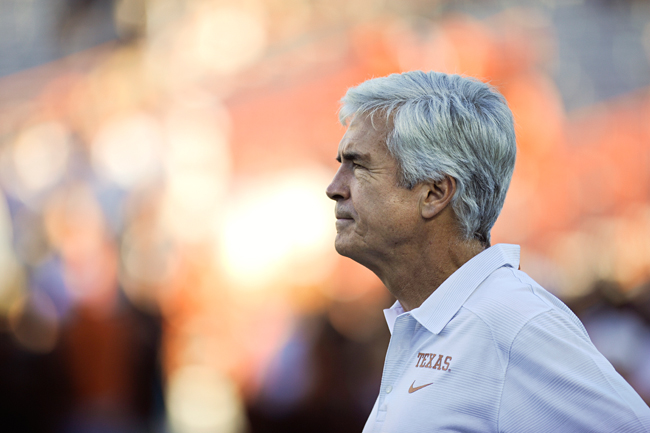 Texas was not sharp on defense in Greg Robinson's first game as the Longhorns defensive coordinator this year, a 44-23 loss to Ole Miss, but was much improved in the following week's victory over Kansas State and is looking to continue progressing this week against Iowa State.

More than three weeks ago, Mack Brown made a change.

“[We’re] a lot more comfortable [with Robinson],” said senior defensive end Jackson Jeffcoat. “We’re starting to really learn what he wants from us.  Everyday he gives us more and it’s easy to pick up because we understand how he coaches, his coaching style, everything like that.”

Since Robinson joined the team, the Longhorns have given up only 387 rushing yards — a huge area of concern for the defense — over two games. That is 163 yards less than the Diaz-led defense gave up on the ground to BYU, the last team Texas faced before Diaz was fired.

Diaz handed Robinson a defense that was, statistically, the worst defense in program history in 2012. Texas allowed 403 yards and 29.2 points per game last year. In the first two games of this season, the Longhorns allowed an average of 23.5 points and 513 total yards per game.

Robinson has helped change that.

“Defensively, you have to give Greg Robinson and the other coaches credit for bringing them back,” head coach Mack Brown said. “The players are obviously there. We missed fewer tackles.  We chased the ball better.  There were fewer people wide open.  I thought that’s the kind of defense we wanted to play coming into the season.”

One of the biggest features that Robinson has brought to the team since his arrival is the outside look he has been able to provide. A two-time Super Bowl winner as the Denver Broncos’ defensive coordinator in the 1990s, Robinson has the ability to examine the team from a new perspective since, unlike Diaz, he hasn’t been around the team and looking at the same thing as them for the past two years.

Jeffcoat even brought in his classroom experience from his Business Management class to explain how Robinson has helped consult the defense with his outside look.

“In class we’ve been talking about something like this,” Jeffcoat said. “In companies you have certain ways you do things and you get stuck in those ways. If you bring somebody from the outside they can oversee and see if there’s a problem that needs to be fixed. It can work better because they aren’t thinking in the same mindset as groupthink and the way the group is. He was that outside guy that came in. He said ‘man I know what your problem is’ and was able to fix it.”

Jeffcoat joked his “company” wasn’t Enron and they weren’t that difficult to fix.

Come Thursday, Robinson will have had 12 days to prepare for Iowa State. He had a bye week gave him extra time to get his defense fully on track with his schemes and a chance to get a better look at the company he is now running.

“I think we are definitely growing,” said senior
cornerback Carrington Byndom.  “Of course, it was new when [Robinson] first got here.  But this is the second week.  We have no choice but to grow, and we will continue to grow throughout the rest of the year. Just keep improving.”