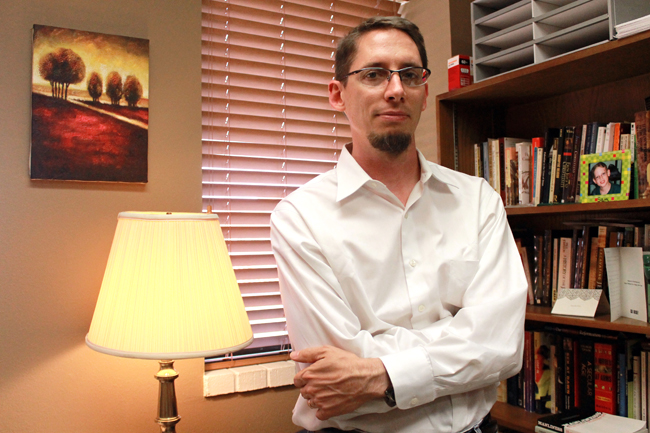 UT sociology professor Mark Regnerus, the author of a controversial gay parenting study allegedly showing that children of same-sex parents are damaged as a result, spoke this weekend on a panel put on by the Religious Newswriters Association in which he called for “greater civility” in discussing gay marriage, acknowledging parenting studies like his will not “solve national and global debates” surrounding the issue.

Moreover, in recent months, Regnerus has inserted himself into the international debate regarding same-sex parenting in a decidedly political way, raising important questions about his complicity in the ways in which his study is being used to limit LGBTQ rights.

Initially, I defended Regnerus’ right to fight for his flawed study in the academic sphere.  However, it’s clear to me now that assuming good faith was a naïve mistake. I was wrong: Regnerus has not been irresponsibly silent. At best, he has been reckless in his promotion of his work without regard to the fallout. At worst, he is aware and doesn’t mind.

In February of this year, Regnerus gave an interview to a Russian language news agency in Ukraine. The homophobic article that resulted cites “shocking” evidence from a “reputable university” (ours)  showing inferior results for children of same-sex parenting. The reporter asked Regnerus about a September 2012 investigation into whether Regnerus breached ethics standards in his research protocol. The article claims that not only did the University say that Regnerus did nothing wrong, which is true, but that UT has allegedly tested the methodology and confirmed that the research is of high quality. Actually, the University has not taken a position on the quality of the study.

In the Q-and-A, Regnerus explains the University’s ruling on the ethics allegations. He restates that his data is accurate and accessible. The article ends by saying the study shows “the tragic consequences” of gay parenting.

While Regnerus’ responses themselves are no different from what he has told this newspaper, Vse Novosti is not The Daily Texan. Regnerus gave this interview in a Russian-language news outlet shortly after the State Department expressed its concern about the “discriminatory” anti-gay laws then being debated there, laws that were later passed.

Adding cowardice to irresponsibility, Regnerus still told The Dallas Morning News in June that he could not police ideological uses of his study. Regenerus’ Vse Novosti interview seems even more reckless in hindsight as his study was later used by Russian lawmaker Andrei Zhuravlyov to advance a bill that would allow the removal of children from same-sex households.

A few weeks ago Regnerus spoke out against Zhuravlyov’s bill, and I applaud him for that. But in the same column, Regnerus defended his foray into the political sphere based on his personal opposition to gay marriage. Zhuravlyov’s  bill had not come up when Regnerus gave his interview. However, are we to believe that Regnerus was not aware of Russia’s general situation when he chose to respond to the Russian language outlet even as he declined to be interviewed by The New York Times?

University documents show that the Office of Public Affairs collaborated with Regnerus on the initial press release for the NFSS study. They highlighted the sensitivity of the study and reminded him of the expected negative reaction to the research. Given the risks to the University’s and his co-researchers’ reputations, why didn’t Regnerus steer clear of high-profile political debates his study doesn’t address? Regnerus claims that he is merely an objective scientist, but in the last year he has acted more like a political hack than an intellectual responsibly using his position.

Perhaps the newest Russian initiative to remove children from the homes of same-sex couples has taught Regnerus the risks of inserting himself into complex cultural and legal debates. If so, Regnerus should admit his role in politicizing the study and apologize for contributing to its misuse. If not, the University community should call him to account for his irresponsibility.