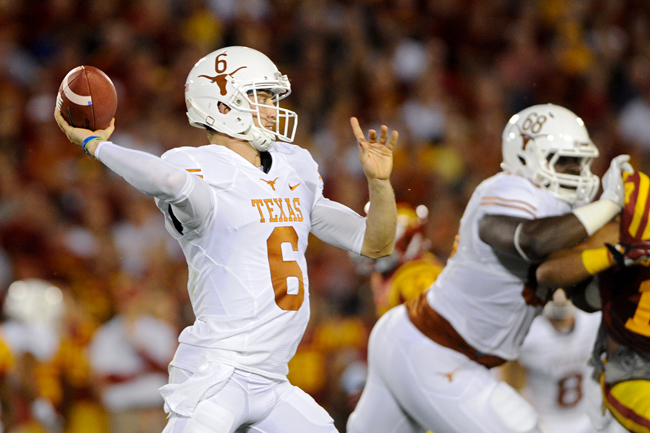 Texas fans have can continue breathing regularly as the Longhorns barely escaped an upset bid from Iowa State on Thursday night, narrowly improving to 2-0 in the Big 12. After a thrilling — if that’s what it’s called — 31-30 Texas win, here are four key aspects to take away from Thursday night’s game:

Texas survived, but that’s all it did. The Longhorns escaped with a win but through the duration of the game, they were inconsistent on both sides of the ball. After a strong showing from the Texas defensive front against Kansas State, the Longhorns went back to their old ways of missed tackles and soft play. Texas missed two tackles in front of the end zone to give Iowa State the 27-24 lead and huge momentum in the fourth quarter.

Texas allowed Cyclones quarterback Sam Richardson to run the ball and remain a dual-threat, which brought back memories of BYU quarterback Taysom Hill’s manhandling of the Longhorns’ last month. Richardson converted seven third-downs himself with some of them ending with long yardage gains.

Texas had much help on Thursday night in the form of yellow flags spiraling through the air. Iowa State committed 10 penalties for 118 yards, which moved Texas down the field quite nicely when it needed. Of those penalty yards, 38 came on the game-winning drive to set Texas up with the short yardage and the eventual touchdown.

The Cyclones had more than three times the normal penalty yardage they usually give up, which, in the end, cost them their first Big 12 win of the season.

Texas fans can either love or hate senior quarterback Case McCoy. The younger brother of former Texas star Colt McCoy remained consistently inconsistent in his second start of the season. McCoy was off target on many passes, which stopped Texas’ drives and created easy turnovers for the Cyclones. Specifically, McCoy had Mike Davis wide open on multiple occasions — including one in the end zone — but overthrew him, stopping any offensive production.

McCoy, however, was able to bring back memories of his 2012 comeback win against Kansas and the infamous 27-25 victory against Texas A&M. The senior had less than four minutes to move the Longhorns 75 yards down the field to take Texas’ second conference win of a so far disappointing 2013 season.

The Texas offensive line was much larger and stronger than its counterparts on the Iowa State defensive front. That strength opened up a large opportunity for Texas to use the run game to its advantage. The Longhorns went with a pass-heavy offense in the first quarter, which provided minimal results.

When Texas did run the ball, though, it missed more opportunities. Junior running back Joe Bergeron fumbled in Texas territory, which set up the chance for the Cyclones to take the 27-24 lead. At the goal line on the game winning drive, sophomore running back Johnathan Gray got lucky on a controversial no-fumble goal and on the next play fumbled it but
recovered it himself.

Check out photos from Thursday's win at Iowa State.