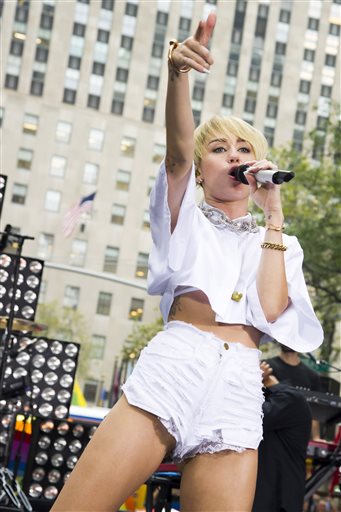 If you thought Miley Cyrus’ display of tongue-wagging, eyebrow-raising, clothing-optional performances was one of the greatest acts of all time, you were wrong.

In an extended interview for her MTV documentary “Miley: The Movement,” the former “Hannah Montana” star admitted that she has chosen to walk away from acting to pursue her music career.

“I thought after my show, I was gonna act,” Cyrus said. “I did one movie and I came back and said, ‘I’m never doing that again. I’m going to do music for the rest of my life.’”

The comprehensive documentary, which aired Oct. 6, showed a different side of Cyrus, who we have come to know through her hair chopping, hammer licking and twerking.

The last movie Cyrus appeared in was “So Undercover,” which featured Jeremy Piven and Cyrus’ friend Kelly Osbourne. Despite earning $2.1 million in oversea box offices, the movie proved to be a dud in the United States. “So Undercover” was scheduled to be released in theaters in October of 2011, but was later moved to go straight to DVD in February 2013.

Since stepping out of the “Hannah Montana” spotlight, which spanned her childhood, Cyrus has been able to reinvent her image. Her new album Bangerz, which releases Oct. 8, is giving Cyrus the chance to break out of the Disney darling phase and step into the chaotic, and at times racy, scene of a wild child.

“I’m starting as a new artist,” said the “We Can’t Stop” singer.

Cyrus, who recently called it quits with Australian fiance Liam Hemsworth, has decided to devote all of her time to promoting Bangerz, which has already given her a No. 1 song, “Wrecking Ball,” the second single off her album.

“I’m gonna sleep when I’m dead,” she said, “’cause right now, this isn’t the time to be worried about how many hours of sleep you can get or how much you can hang out.”

At just 20 years young, Cyrus has plenty of time to dedicate to music. And as we have seen with her new persona, Cyrus is sure to have us asking, “What will she do next?”