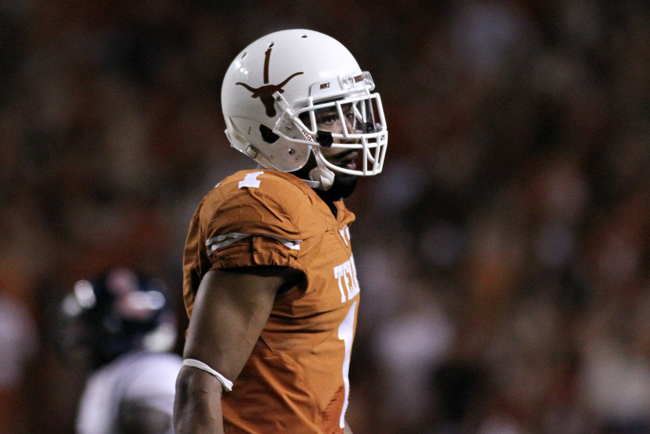 Mike Davis played injured on Thursday night against Iowa State. He battled through a painful ankle injury, caused a mismatch every down and had a good game with six catches for 64 yards. Yet, none of that matters after his blatant cheap shot during the third quarter.

On an easy Joe Bergeron touchdown with 4:30 remaining in the third, Davis went for a block in the end zone, well away from the play, taking out the knees of Cyclone defensive back Deon Broomfield.

It was dirty, unnecessary and blatant, a play deserving of a one-game suspension — something Texas should enforce.

That won’t happen, of course. The Big 12 handed down its punishment to Davis on Saturday in the form of a written reprimand from Big 12 commissioner Bob Bowlsby, essentially a verbal scolding from an upset parent — an angry wag of the finger.

Monday, Davis did show some remorse for the block. Nonetheless, Davis said if the same situation came up again, he’d repeat his actions.

“If the DB’s loafing, he deserves to get cut,” Davis said. “I think people blew it out of proportion. They took it too far.”

Players are taught to play to the whistle from youth football, but they are not instructed to block in such an egregious fashion. Davis’ block went straight at the knees of Broomfield, there was no effort to square up and push him in the chest or even a glance at the shoulder pads. Davis attacked the weakest body part of the player who had pushed and banged him around the entire contest.

In addition to his comments Monday, Davis went on a Twitter rant following the game, shielding his actions.

“I don’t have a history of being a dirty player and have never been called one,” Davis said. “The tape without knowledge of the circumstances is unfair.”

“The play call was an option to either a run or WR screen,” Davis said. “My job is to protect our WR screen & block my defender. I wasn’t aware it was.”

“I wasn’t aware it was a run,” Davis said. “Check the tape and you can see our other WR is also blocking his defender. I did exactly what we are taught to.”

But if you check the film, Davis’ block came well away from the play, and while he did have his head down, the running back’s dive wouldn’t have been affected by Broomfield working off his block. Davis never looked up at the play, just went straight at the knees, and, thankfully, Broomfield escaped without an injury.

Davis’ block is more at home in the realm of World Wrestling Entertainment instead of the college football field. Actually, it looked remarkably similar to the block for which Ndamukong Suh — widely considered the NFL’s dirtiest player — was fined $100,000 earlier this season.

It would be tough to lose his most dangerous weapon for the imperative game on the Longhorn schedule, but future player safety and the development of character is paramount.

Davis is not a dirty or a malicious player, but his actions deserve more than a statement of disappointment because Broomfield sums it up best.

“Mike Davis really tried to take me out,” Broomfield said.