Gov. Perry’s Texas Enterprise Fund might create Texas jobs, but is it fair? 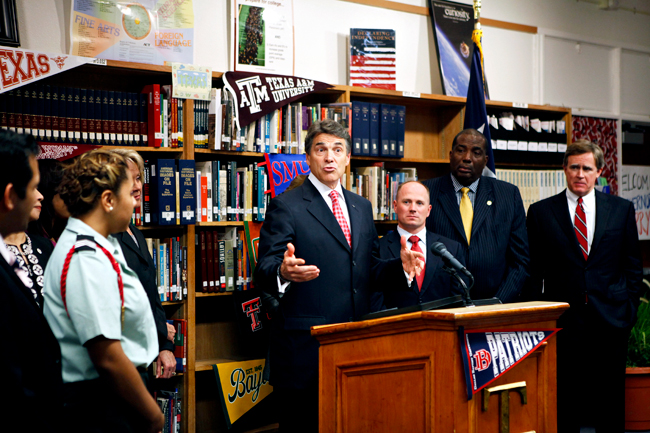 As evidenced by the unofficial city slogan, “Keep Austin Weird,” Austin prides itself on its independent businesses. But since that phrase was trademarked in 2003, eight of Austin’s 10 tallest buildings have been built, a construction statistic indicative of the increasing corporate presence in our capital city. As companies began setting up headquarters in Travis County, the pace of suburban sprawl accelerated around the metropolitan area. Soon some Austinites began adopting a new mantra: “Don’t Dallas my Austin.”

Austin’s population boom over the past decade and a half coincided with Texas’ adoption of some of the most business-friendly regulations in the country. Many factors make Texas an attractive place to move or start a business, including favorable laws, increasing urbanization, and proximity to oil and gas industry hubs.

But one business incentive, the Texas Enterprise Fund, has proven itself more contentious than others.

Set up in 2003 by the Texas Legislature, the enterprise fund is the largest “deal-closing” fund in the nation. Using this fund, Gov. Rick Perry’s office can offer substantial sums of money to companies to set up offices in the Lone Star State when deciding between a Texas site and out-of-state options. The money comes with a catch: Each company that receives a grant must promise to generate a certain number of jobs.

The promise of the enterprise fund to create jobs holds a particular importance for graduating seniors. But what does the fund mean for students as a whole, many of whom will be entering the workforce in the next few years?

While its existence is a testament to the high esteem in which state legislators hold free enterprise, the enterprise fund has had a controversial existence. In April, the Legislature voted almost unanimously for the state to perform an external audit of the fund, a move that the Fort Worth Star-Telegram mused might have been a dig at the fund’s leading proponent, Perry.

The left-leaning Texans for Public Justice has also condemned Perry’s office for changing after-the-fact the target number of jobs created for several companies that received enterprise fund grants, ensuring that these companies would keep the grant money despite not achieving their goals.

Even Texas Attorney General Greg Abbott, Perry’s likely successor to the governorship, hints that he would eliminate the fund if elected.

“We can [elevate the Texas economy] by leveling the playing field and getting government out of the business of picking winners and losers,” Abbott said in a September speech, in a notable departure from Perry’s aggressively pro-business take on governance.

Not one to be cowed by controversy, Perry touted the enterprise fund on the presidential campaign trail in 2011 as part of his job-creating credentials.

The Wall Street Journal examined the job-creation numbers issued by Perry’s office during his presidential campaign and found that they had been inflated. It also noted charges from Perry’s opponents that the fund could be used to trade political favors with campaign donors.

From the perspective of a student graduating to the worst job market in decades, the fund seems to have serious upsides. A chart released by the governor’s office this summer details all the companies that have received funds, and the list is studded with firms that have prized internships and jobs open to UT students. JP MorganChase, Apple and Hewlett-Packard all hire UT students and all were awarded millions of dollars in funds in the past five years.

It’s hard to know if these businesses would have opened Texas offices without the incentive funds, as critics contend, but risking the robust job market for college grads will be a tough sell.  We as students benefit from the jobs it brings into the state, but as citizens we should be aware of the transparency issues that come with it.

Matula is a finance junior from Austin.