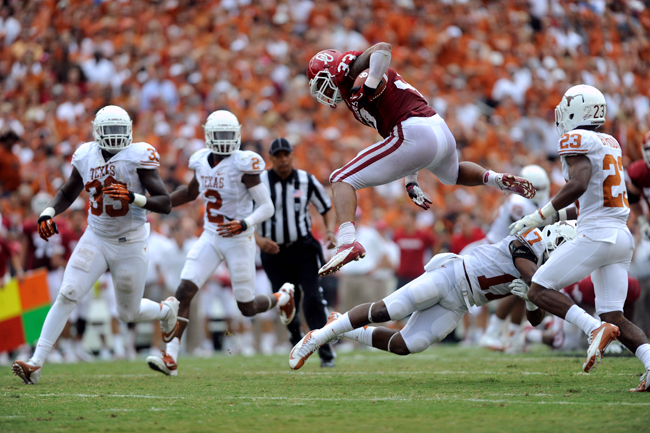 The Red River Rivalry is never a game to miss, thanks to the fried food, the State Fair of Texas and a deep-seated hate between Oklahoma and Texas. Well, that is unless you’re a Texas fan trying to duck three-straight years of tough losses.

The last two years have been especially rough for the Longhorns. The Sooners forced eight turnovers and blew Texas out by a combined score of 118-38. If the Longhorns want to avoid a similar fate this year, they need to do two things: win the turnover battle and keep the game close early.

Huge first-half deficits have been a major issue against Oklahoma. The Sooners, fueled by early Texas turnovers, have outscored the Longhorns 70-12 in the first half of the past two games. The same was true in 2010, when the Sooners held a 21-7 halftime advantage and an edge in the turnover battle. It’s not surprising then, with those numbers, to see the results for Texas in the past two years.

Still, the Longhorns don’t have to lead at the half — they just need to keep it close.

Since 2005 — when they led 24-6 at intermission en route to their first win over Oklahoma in five years — the Longhorns haven’t held a halftime lead over the Sooners. Yet, they have won four of those eight games, including in 2006, 2008 and 2009 when they were able to overcome slim halftime deficits.

The key for the Longhorns is keeping the game close early. The difference between a team’s strategy and its chances of winning differs dramatically if it is losing by a single possession at halftime rather than by double digits. Therefore, it comes as no surprise that the Longhorns lost by 42 points last year after a 36-2 halftime deficit. Compare this to when they rallied from down 10-7 at intermission to win 28-10 in 2006, similar to 2008 and 2009 when they came back after trailing by single digits, and the difference is clear.

To keep the game close, Texas must win the turnover battle. In their last three losses to Oklahoma, the Longhorns have coughed the ball up more than 10 times and only forced two turnovers, giving the Sooners insurmountable leads early on.

Considering Texas’ offense has had its fair share of difficulties this year and will be starting backup senior quarterback Case McCoy, it can’t afford to make silly mistakes. In fact, it needs to force the Sooners into making some of their own. History shows whichever team does a better job of this will leave Dallas with the win. Since 2005, the team that won the turnover battle has not lost.

Texas fans won’t have to wait around long for the result of the game. They will know by halftime.