The Daily Texan talks with FIDLAR about injuries, secret skills 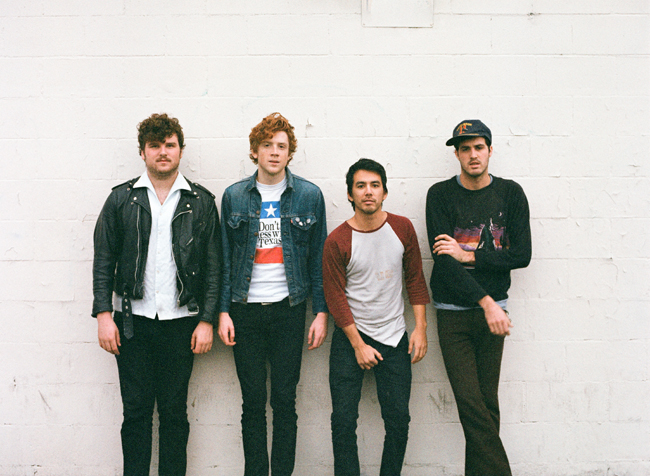 With thrashing guitars, fast drums and 60-second songs about love, drugs and being broke, FIDLAR brings a mix of punk, garage and surf rock to Austin City Limits Music Festival. FIDLAR stands for “Fuck it dog, life’s a risk,” an old skate motto that encourages living life to the fullest, regardless of the consequences. For the band, following that motto has been a good choice.

FIDLAR formed in 2009 in Los Angeles. The band is composed of Zac Carper, Brandon Schwartzel and brothers Max and Elvis Kuehn. The guys began playing house parties but have already toured Europe and played across America with some impressive acts, including The Hives, Adolescents, Black Flag and OFF.

Like its music, the band is energetic, playful and driven. In the shade at the Press Lounge at ACL, FIDLAR took some time to talk to The Daily Texan.

The Daily Texan: How are you liking Austin so far?

Elvis Kuehn: We love it, it’s been good. Austin is a great city.

DT: Has anyone ever injured themselves on tour or on stage?

Max Kuehn: Yeah, my toe is bleeding and is really bad right now. I’ve got a gimp walk.

BS: Elvis scraped his hands pretty bad last tour, Zac got laryngitis in Germany, fucked up his knees quite a bit. We’ve had our fair share of injuries, but nothing major.

EK: There was one time, it was quite a long time ago, but there was this PA that got knocked over. I was standing behind the speaker and it got knocked over and hit me right in the nose. That was bad.

BS: It’s usually a next morning kind of thing, you wake up and you’re like, “Oh shit, that really hurt.” You don’t really feel it at the time.

DT: What’s the strangest thing you’ve ever been given?

Zac Carper: It’s not the bowl you’d hoped for.

BS: At first you’re like weed, yeah, then all you can think is you have to get away from this guy.

DT: Does anyone actually throw underwear?

BS: There actually has been, well there’s this venue called the Observatory in Santa Ana, which is close to where we live in L.A., and not this show past, but the one before that there were, for the first time ever in my life, there were bras on stage. But they were all like 14, and it was just not appropriate. It was kind of cool, but not really.

DT: Do y’all have any secret skills unrelated to music?

DT: What bands are you excited to see at ACL, or will you not get a chance to see any?

DT: How do y’all not get sick of each other on tour?

MK: Try to have personal space.