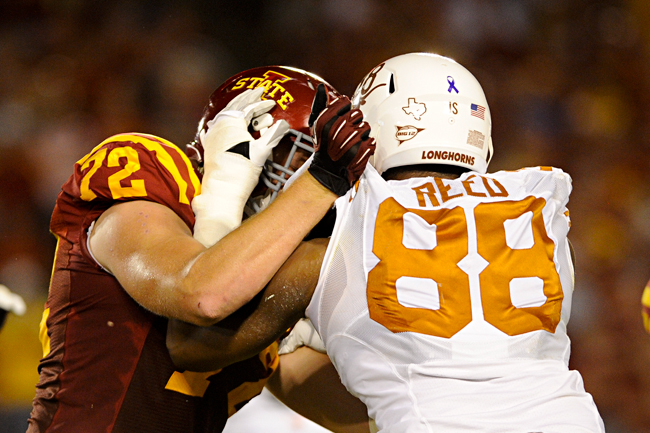 With Jackson Jeffcoat playing like a man possessed the last several games, it’s easy to forget about Reed, who had been quiet since racking up 14 tackles against BYU. But he came to life against the Cyclones last week, totaling five tackles, a forced fumble and tipped a pass that Jeffcoat intercepted to seal the win. With Oklahoma sure to key on Jeffcoat, Reed should have plenty of one-on-one opportunities on Saturday. If he can take advantage of them and get to Sooners quarterback Blake Bell, he will provide a major boost for this entire Texas defense.

Although he is far from explosive, give McCoy some credit: he has been efficient in his time under center this season, throwing 102 passes this year without an interception. Given Oklahoma’s advantages in terms of speed and big-play ability, it’s imperative that McCoy continues this type of play and limits his mistakes. For the Longhorns keep this game close, they have to win the turnover battle.

What do you do in your first conference road game of the season and your backup quarterback under center? Get the ball in the hands of your talented running backs and control the clock, right? Not if you’re Major Applewhite. Although critiquing a team’s play-calling is often an example of why hindsight is 20/20, it’s appropriate in this case. While Case McCoy did pass for nearly 250 yards and a touchdown, he threw 45 passes for a paltry average of 5.4 yards an attempt. Considering the talent the Longhorns possess at the running back position and McCoy’s inability to generate a downfield passing game, Texas should have looked to run a lot more than it did. Unless the Longhorns are playing from behind, there is no reason McCoy’s throws should ever triple the number of carries Johnathan Gray gets.

Back in action after missing last week’s game due to injury, Davis was held in check for most of the game against Iowa State, hauling in six catches for 64 yards. This marks yet another tough week for Davis, who has yet topped 65 receiving yards in only one game this year. What’s most perplexing about this lack of production is that it’s happening despite the Longhorns’ desire to air it out and stretch the field. How Davis only managed to catch six passes in a game in which Case McCoy threw it 45 times, I’ll never know.