Despite potential safety risks, course auditing to remain the same 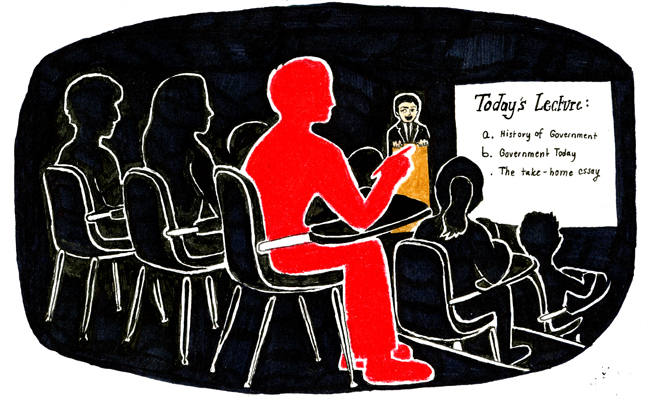 Chenxi Deng, a 22-year-old graduate of Peking University in Beijing, audited a UT course to stalk the student he would eventually stab in the face. According to the University’s course auditing policy, a jail cell is the only thing keeping Deng from auditing another course in the future.

A non-UT student needs only an instructor’s signature, $20 and an open seat in a classroom to audit a course, according to Kim Taylor, spokeswoman for the Office of the Registrar. An auditor attends class but does not hand in papers, take part in discussions, receive evaluations or earn any credit.

Additionally, the Office of the Registrar does not keep electronic record of course auditors, according to Shelby Stanfield, vice provost for enrollment management and registrar. In that respect, previous auditors, such as Deng, could come back to audit more courses.

“There is no process that if somebody comes back and tries to audit a course that we would check that, or that they would be tagged in the system for us to deny them admittance,” Stanfield said.

The University’s course auditing program has been open to the general public and has remained largely unchanged since the early 1940s, according to Taylor.

Derrick Mitchell, a radio-television-film and Persian language and literature senior, said he finds the lack of oversight on the University’s auditing policy to be weird.

“You should at least be a student or have some professional tie to the University to audit a course,” Mitchell said. “What’s the point of calling it a University if anyone can sit in a classroom?”

Stanfield said course auditing is akin to other University resources provided to the general public, such as access to museums and sporting events, as well as the Tower observation deck or the Union Underground.

“Events on campus don’t require sign up,” Stanfield said. “Most buildings and facilities on campus are open to the public. In one respect, getting an instructor’s approval and paying a fee is more stringent than all the other public activities that take place on campus day in and day out.”

LaToya Hill, associate dean of Student Conduct and Emergency Services, said Deng’s actions would have met the criteria for permanent separation from UT and all other UT System institutions, but course auditors are not subject to University judicial policy because they are not technically students.

Stanfield said auditing programs are common at other universities but noted he is not aware of other institutions’ procedures.

“I don’t think our auditing process is unique by any stretch of the imagination,” Stanfield said.

UTPD Sgt. Charles Bonnet said Deng and the victim were involved in a romantic relationship as undergraduates at Peking University, though the victim left China after graduation to pursue her master’s degree at UT. Deng was allegedly auditing a high-speed computer arithmetic course to stalk the victim and rekindle their past relationship.

Electrical engineering professor Earl Swartzlander, who presumably granted Deng access to his classroom, could not be reached for comment.