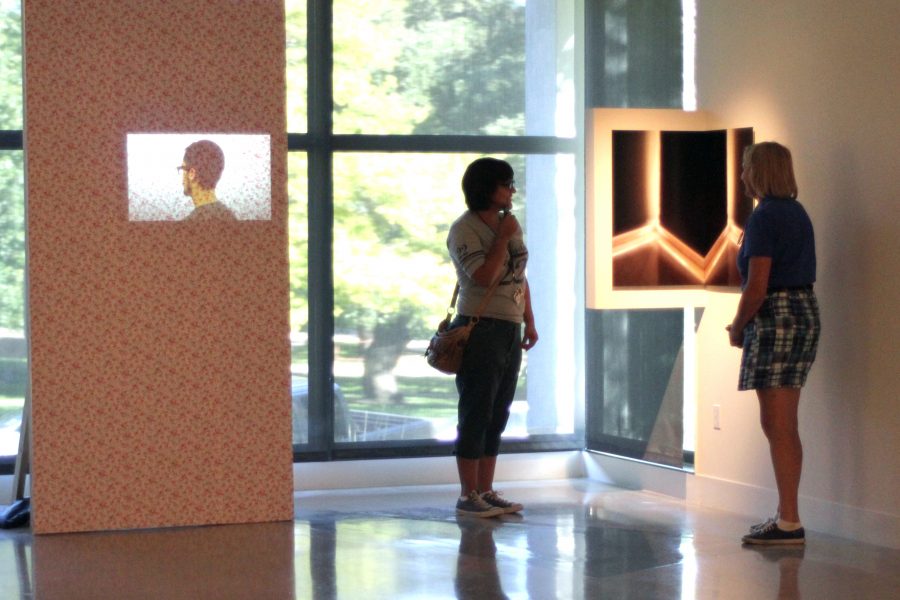 Roxana Gonzalez and Vera Boone walk through the exhibit “In Our/Their/Your Midst” at the Visual Arts Center on Tuesday afternoon. The exhibit is a collaborative work by Studio Art graduate students Eric Swanson, Phil LadDeau and recent graduate Janaye Brown. " />

Roxana Gonzalez and Vera Boone walk through the exhibit “In Our/Their/Your Midst” at the Visual Arts Center on Tuesday afternoon. The exhibit is a collaborative work by Studio Art graduate students Eric Swanson, Phil LadDeau and recent graduate Janaye Brown.

Instead of using bright colors and objects that seem to be in constant motion, the artists of “In Our/Their/Your Midst” — a current exhibition at the Visual Arts Center — take a different approach.

“There’s a lot of subtlety and nuance in the work, which you need to kind of slow down to see,” said Erik Swanson, current MFA candidate in studio art at UT.

“We got a lot of opportunities to see each other’s work in the program … You kind of notice similarities, or you build up affinities to someone’s work,” LaDeau said.

The name of the artists’ exhibit, “In Our/Their/Your/Midst,” is open to interpretation, but Swanson said there was an idea that went through the artists’ minds as they created the title.

Brown said part of the function of the exhibit is to go somewhere beyond the frame.

“It’s not overloaded with pieces, so you can kind of experience one. There’s room to walk and have that time to contemplate possible happenings,” Brown said.

Brown works with video, LaDeau works with drawings and Swanson works with sculpture. In the exhibit, viewers can explore a video of a moving carnival ride created by Brown.

“You’re really watching what’s in the background … rather than the foreground, which is usually where all the action happens,” Swanson said.

Each artist works in his or her own medium and has the freedom to make individual decisions, despite the collaborative nature of the exhibit.

Brown worked in film production for a long time, but now she prefers to work more with art, a career that allows for more freedom.

“I switched over to art, just so I could work by myself and I just felt like there was more opportunity to not make narrative-specific work,” Brown said.

This individualism, though, does not mean the artists can pull off something like “In Our/Their/Your Midst” alone. Swanson’s favorite piece in the exhibit is a piece that combines the skills of all
three artists.

“It’s really Janaye’s video, but Phil is in the video, and I built the wall that it’s projected on,” Swanson said.

According to Brown, the three contributing artists communicated over text, email and in-person to make important decisions for the exhibit.

“Some of us are beginning to have a similar dialogue,” Brown said. “Say [Eric and I] watch a similar film. We’re interested in different things, it doesn’t mean the same product is going to come out of it. But just the fact that we’re able to critically think about an idea or a piece of work. I think that’s extremely strong, and important
and exciting.”

After this exhibition, all three of the artists will head in different directions. But they will use the influences they left on each other in future projects.

“I think what happens sometimes is, at least within peer-to-peer situations, is you see somebody do something, and it kind of opens a doorway for you,”
LaDeau said.