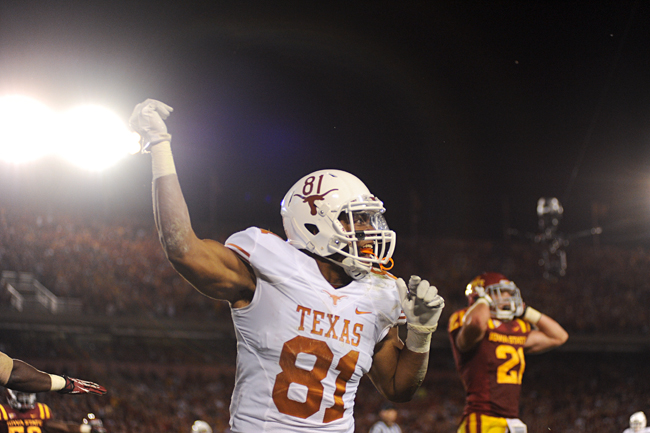 When Texas takes the field at the Cotton Bowl on Saturday, it will mark just the third time since 1990 that the Longhorns enter the Red River Rivalry game as a double-digit underdog.

While conventional wisdom indicates that Texas should face an additional burden to disprove the spread, the Longhorns enter the game with a different approach — they plan to embrace their underdog status.

“That’s exciting for us,” senior defensive end Jackson Jeffcoat said. “We like to be the underdog, to come in with the opposing crowd. It’s different in Dallas because the crowd is split. You have people booing you and you have a lot of people cheering you as well.”

After losing each of their past three matchups against Oklahoma, a number of Longhorns players claimed they do not feel additional pressure to defeat the Sooners this season. Instead, they believe the majority of the pressure resides squarely on the shoulders of the heavily favored Sooners, and it is up to them to rise to the occasion when many are counting them out.

Texas and Oklahoma enter Saturday’s matchup after undergoing significantly different starts to the season. While both sit atop the Big 12 standings with 2-0 records in conference play, the Sooners boast a 5-0 overall record compared to the Longhorns’ 3-2 mark.

The biggest difference between them, though, remains the disparity on defense. Oklahoma owns the nation’s sixth-best defense, allowing an average of just 13 points through five contests. Texas, on the other hand, sits second-to-last in the Big 12 with 28.4 points per game surrendered thus far.

In addition, the Sooners enjoyed better success against non-conference opponents than the Longhorns. Oklahoma defeated No. 22 Notre Dame on the road in Week 4, while Texas dropped a pair of non conference contests against BYU and Ole Miss.

These factors add up to brand the Sooners as the favorite this week, but senior wide receiver Mike Davis believes the hype surrounding Oklahoma allows Texas dedicate its focus to playing together as a team.

“Our backs are against the wall and they’re getting all the pressure,” Davis said. “I just want to go in and compete as a team, like how we’ve been doing the past couple games, and try to get a W any kind of way we can.”

Despite the team’s underdog approach, head coach Mack Brown pointed out that pressure still exists for his Texas squad. Brown said he does not take point spreads into account, but he believes some players may feel they were too tense going into last year’s game.

“I would think the guys felt they were too uptight probably last year and they want to go into it confident and relaxed,” Brown. “There’s obviously pressure on both teams.”

Regardless of which team is the favorite, the Longhorns realize the difficult challenge the Sooners present this week, and a victory over their rivals would be a major step in the right direction.