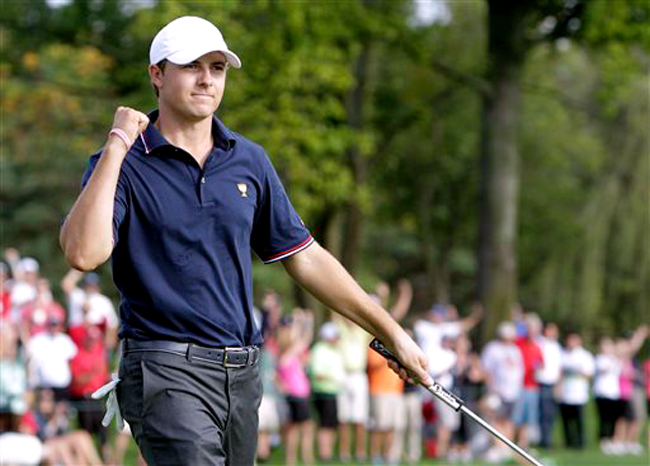 Apparently having one of the most successful rookie seasons in PGA Tour history has not affected Texas legend Jordan Spieth at all.

Sophomore golfer Kramer Hickock, a longtime friend of Spieth, said the rookie sensation hasn’t changed a bit. According to Hickock, despite raking in roughly $3.8 million and accruing significant fame in the past year, Spieth has yet to even buy himself a new car.

“Believe it or not, he’s still driving his car that has over 150,000 miles on it, so that might tell you something,” Kramer said.

Seems odd that someone who is just 20 years old with that much wealth would not jump to spend it on himself. But then again, Spieth is far from the average
20-year-old.

At that age, most people are not winning PGA events in their first season. They are not going from being ranked No. 810 in the world to being ranked No. 20 in just nine months, en route to winning the Rookie of the Year award. They are not posting nine top-10 finishes in 23 events and getting selected to play in the President’s Cup. Spieth has, though, and it has even caught his former teammates by surprise.

“We all knew he had it in him but I don’t think anyone knew it was coming this soon,” Hickok said. “Hats off to him, he works extremely hard and it is paying off
for him.”

Just one year ago, Spieth was still teeing it up with the Longhorns. He was still a college kid in his sophomore year and still competing in amateur tournaments. But with the end of the President’s Cup, in which he contributed to America’s winning score of 18.5-15.5, Spieth officially wrapped up his magical year.

As a Longhorn, Spieth had three victories in just 15 events. He scored in the 60s in 18 rounds of competition and was a vital part of the Longhorns’ 2012
national championship title team. The decision to leave early and take the plunge into the pros has undoubtedly paid off for Spieth. It was a decision that Longhorns head coach John Fields said he commends to this day.

“We were lucky to have him at Texas,” Fields said. “He came here, won a
national championship and lit the tower [orange]. He’s had ridiculous success.”

While his professional career is just beginning, Fields said based on his weekly conversations with Spieth, he knows the former Longhorn is handling the spotlight well and believes Spieth has the ability to be one of the best PGA players ever. He also said that because of Spieth, Texas has become an even more desirable university to play golf for.

Senior Toni Hakula, who played next to Spieth on the 2012 National Championship team, said Spieth is representing Texas in the best way possible. He too believes Spieth’s abilities are limitless and said the way he is doing things makes it even
more admirable.

“He’s making all of us proud of how he is playing,” Hakula said. “Everyone knows he went to Texas, we’ve seen him wear a little Texas gear out there, so we are definitely proud of him. He looks like a veteran
out there.”