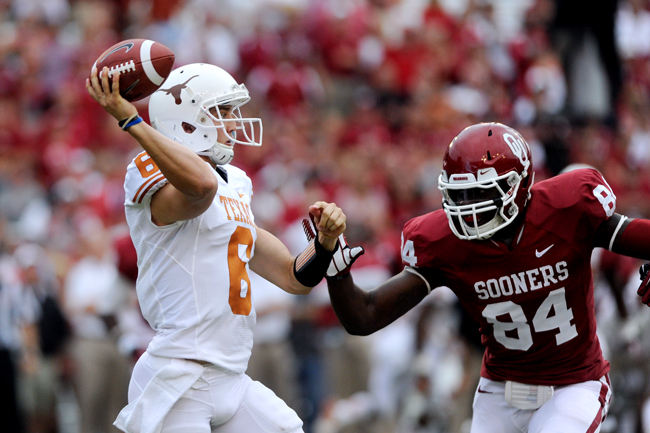 Senior quarterback Case McCoy is hardly a stranger to the big moment.

He guided the Longhorns down the field for a last-second field goal to triumph over Texas A&M on Thanksgiving Day in 2011, the two teams’ last meeting for the foreseeable future. His touchdown strike with 12 seconds remaining spoiled a Kansas upset last season. Just last week, McCoy engineered a comeback drive culminating in a touchdown on a one-yard quarterback sneak to knock off Iowa State.

Despite this impressive resume of late game heroics, a victory over Oklahoma this Saturday would top the quarterback’s list of achievements. Head coach Mack Brown already named McCoy the starter this week in place of injured junior quarterback David Ash, and the senior admits a win against the Sooners would define his legacy.

McCoy played admirably when pressed into action in the Longhorns’ first five games, completing 60.8 percent of his passes for 574 yards and two touchdowns without an interception. His start against Oklahoma marks the ninth of his career, and the senior expects this experience to prove invaluable against the Sooners.

“I think I bring a lot to the team,” McCoy said. “I’m old, I’m mature and I understand whose hands I need to get the ball in. I need to go out there and manage the game.”

McCoy compiled 218 passing yards and two touchdowns without an interception in limited playing time the past two seasons against Oklahoma. Due to this, Brown does not expect McCoy to be overwhelmed by playing on a major stage.

“He will not be intimidated by the atmosphere,” Brown said. “He’ll be excited about it and it’ll be a challenge. For him, it is a chance to step [up] and say ‘Here’s a statement game that I can lead our team in and win.’”

The Texas players share Brown’s faith in the quarterback. Senior wide receiver Mike Davis remains impressed by McCoy’s ability to march the Longhorns down the field when in need of a score, and he believes the senior commands the huddle late in games.

“He has the ‘it’ factor,” Davis said. “When he gets in the huddle, you know he’s going to do whatever he can to make sure we win. He’s going to make plays, and he’s a good leader too.”

Senior right guard Mason Walters said McCoy relishes the opportunity to win a game with the ball in his hands.

“He gets the guys fired up around him,” Walters said. “I remember going on the field last week when we’re down six and Case just had this grin on his face. It’s what he wants. He wants to make those types of drives.”

McCoy believes he is at his best with the game on the line. He said it is up to the entire offense to rise to the occasion in the fourth quarter, but he pushes himself to elevate his game on the final drive of the game.

“I think I bring a level head at that point,” McCoy said. “I’m someone that’s constant, not getting too high and not getting too low. They understand that I’ve been in those situations.”

If the Longhorns find themselves in one of those late game situations this week against the Sooners, it will be up to McCoy to lead the charge once again. Should he manage to do so, it would forever define his legacy with the Longhorns.