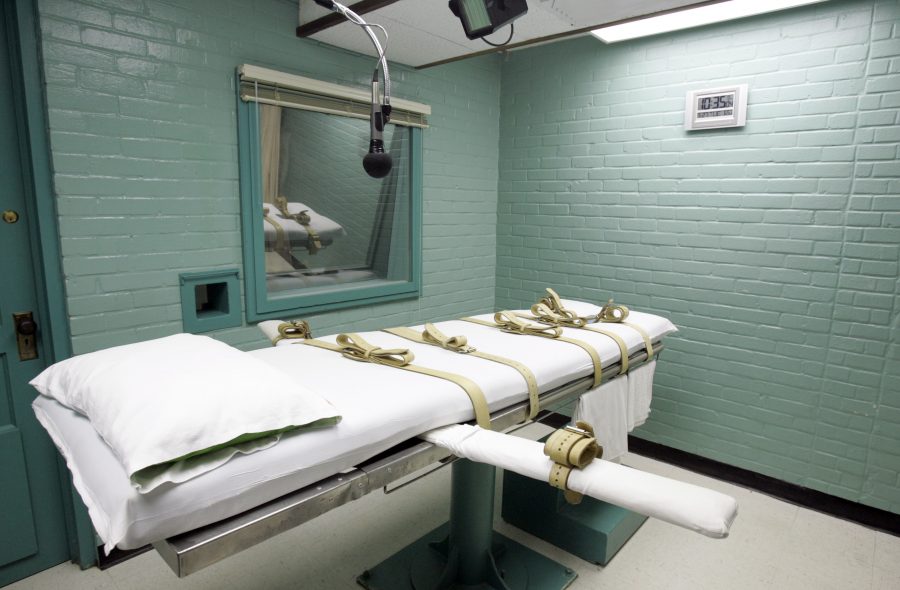 The gurney in the death chamber is shown in this May 27, 2008 file photo from Huntsville, Texas. The Texas Department of Criminal Justice, responding to a Freedom of Information request from The Associated Press, released documents Wednesday, Oct. 2, 2013 showing the purchase of eight vials of pentobarbital last month from a compounding pharmacy in suburban Houston. (AP Photo/Pat Sullivan, File) " />

The gurney in the death chamber is shown in this May 27, 2008 file photo from Huntsville, Texas. The Texas Department of Criminal Justice, responding to a Freedom of Information request from The Associated Press, released documents Wednesday, Oct. 2, 2013 showing the purchase of eight vials of pentobarbital last month from a compounding pharmacy in suburban Houston. (AP Photo/Pat Sullivan, File)

Texas executes more people than any other state by a wide margin — more than the next five states on that list put together. On Wednesday, Texas will add another name to the list of inmates executed, that of Michael Yowell, 43, who will be put to death for murdering his parents and grandmother.

Yowell’s execution is significant because, as The Associated Press reported last week, the drug used to kill him will come from a controversial new supply provided not by a major pharmaceutical company but by a small compounding pharmacy outside of Houston, raising ethical questions about the drug’s quality and effectiveness. The drug, a widely-used sedative called pentobarbital, causes fatal respiratory arrest in high doses. Pentobarbital is used by several states in executions, usually as part of a three-drug cocktail.

The shortage that forced Texas to move to a compounding factory supplier has been a long time coming. In 2011, the Danish pharmaceutical company that had supplied Texas with pentobarbital announced that it would no longer sell it to anyone who used it to kill.

Then, the same thing happened with sodium thiopental, another part of the three-drug cocktail, and Texas and several other states abandoned the three-drug protocol in favor of a straight dose of pentobarbital.

But before long Texas had exhausted its supplies of pentobarbital. The last inmate to be executed in Texas with pentobarbital from a known supplier was Robert Garza, on Sept.  19 of this year. Suddenly, Texas no longer had access to its preferred method of execution.

Texas, and other American death penalty states, have scrambled to find a solution to the impending shortage. At least two states, South Dakota and Georgia, obtained pentobarbital from compounding pharmacies, which custom-manufacture drugs and are not subject to federal regulations, before Texas did. After the news broke that Georgia had done so, that state passed a new law — not to prevent the state from making such purchases, but to ensure that they wouldn’t have to disclose it when they did. Georgia’s first inmate scheduled to be executed with the new pentobarbital supply challenged this law in July, resulting in his execution being put on hold.

When, on Oct. 2, the The Associated Press obtained documents from the Texas Department of Criminal Justice showing that Texas, too, had bought additional pentobarbital from a compounding pharmacy, Yowell attempted in vain to delay his execution by requesting an injunction from a federal district judge, on the grounds that the new drugs were not federally regulated and could constitute cruel and unusual punishment. Two other death row inmates have made the same appeal.

On Friday, two days before Yowell’s scheduled execution, the case took an even more startling turn: Jasper Lovoi, the owner of The Woodlands Compounding Pharmacy which supplied the drug, sent a letter to the TDCJ demanding that they return the pentobarbital he had sold them in exchange for a refund after he attracted a “firestorm” of negative attention when the AP broke the story. Lovoi wrote that he had been assured that the transaction would be “kept on the ‘down low’ and that it was unlikely that it would be discovered that [his] pharmacy provided these drugs.”

The TDCJ refused to return the pentobarbital, and barring new developments, it will execute Yowell on schedule Wednesday evening.

Firstly, compounding pharmacies must be brought under greater regulation. This isn’t just for the benefit of death row prisoners; in 2012, a deadly 20-state meningitis outbreak was traced to a compounding pharmacy in Massachusetts that produced drugs under unsanitary conditions. Fortunately, a bill has been introduced in Congress that would bring compounding pharmacies, and the 4 billion prescriptions they make every year, under the regulation of the Food and Drug Administration.

Secondly, greater transparency must be applied to Texas’ application of the death penalty. The secrecy with which the TDCJ made this shady back-door deal shows that Texas is willing to go to any length to continue with its scheduled executions. It should go without saying that out of all the things the government should never keep on the “down low,” buying drugs to kill people with should be near the top of the list.