The “Belldozer” can air it out 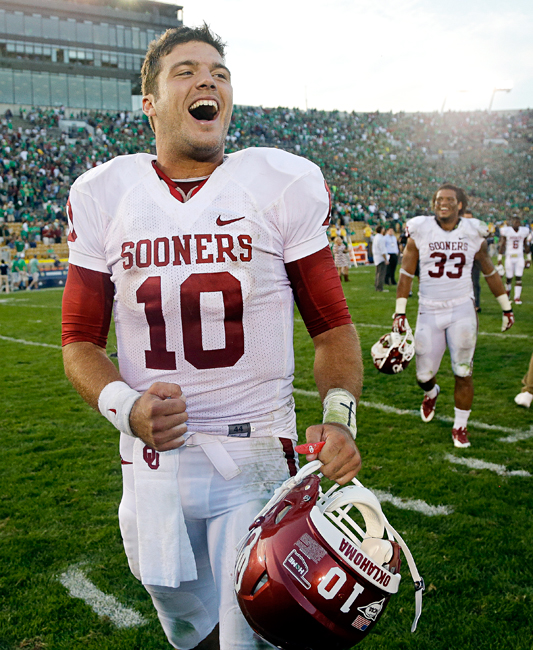 Junior Blake Bell has become synonymous with the “Belldozer” package using his 6-foot-6, 252-pound frame to plow through linemen.

And last year’s Red River Rivalry just reinforced the fear into every Longhorns fan as he rumbled into the end zone four times, despite being Landry Jones’ back-up.

In his first two years, the perceived running quarterback recorded 25 rushing touchdowns compared to none throwing.

But that doesn’t mean Texas can take Bell’s arm lightly.

The Detroit Tigers used a 2010 draft pick on the heralded quarterback – where he hadn’t played in two years – because of his strong arm.

“That’s definitely why they recruited him,” Dusty Trail, Bell’s former offensive coordinator at Bishop Carroll High School in Wichita, Kan. told ESPN. “The running was just a bonus in their eyes.”

But instead of taking the guaranteed money and possibly relieving games for the Tigers this postseason, Bell followed his passion of football.

“No,” Blake’s father, Mark Bell, told NewsOK. “His love and passion is football. He really liked basketball too, but his passion was football.”

He was the heir apparent to Landry Jones and ready to take over the reins of a major program. That is, until freshman Trevor Knight swiped the job from underneath his nose in training camp.

But the freshman’s poor completion percentage and three interceptions in the first two games gave Bell a chance.

“It’s a testament to his character that he didn’t get down, he didn’t get negative,” head coach Bob Stoops said after the game against Tulsa. “He kept working and he got his opportunity and he took all kind of advantage of it.”

The “Belldozer” threw for 413 yards and four touchdowns in the 51-20 victory, proving he could be effective with his arms, not just his legs.

Now people are starting to see why Rivals.com labeled him a pro-style quarterback, not a dual-threat.

“I’ve always said Blake could throw the football and finally everyone got to see that,” Stoops said.

And Texas knows this.

“He can throw,” defensive coordinator Greg Robinson said. “His arm is good. He has a strong arm. He is an accurate thrower.”

So when Bell touches the ball Saturday morning in Dallas, they can’t focus on just one facet.

“Well, they always talk about him being a runner but he can throw the ball,” senior defensive end Jackson Jeffcoat said. “And also he can run the ball. He’s big and he’s hard to bring down. That’s what makes him unique. He’s a dual threat kind of guy.”

On Saturday, the Sooners’ top NFL prospect won’t have the ball in his hands.

And he will be making sure the Texas receivers don’t either.

So when he made his first start in 2010 against Texas, he was thrilled. And it hasn’t worn off.

“My excitement level for OU-Texas is the same as it was when I was a freshman,” Colvin said.

Colvin has done more than just play in one of the game’s biggest rivalries, though.

He ended his freshman year as the starting cornerback. Then switched to safety for his sophomore campaign. And when he returned to corner last year, all he did was garner All-Big 12 honors.

As one of the conference’s top shutdown corners, Colvin anchors an Oklahoma secondary that boasts the 10th-best passing defense in the nation allowing just 168.4 yards per game.

He also isn’t afraid to mix with the big bodies in stopping the run game.

This combination of run stoppage and pass defense helps give Oklahoma the No. 9 defense in the nation.

But despite the records of the two teams, Colvin realized that this game is still the biggest one.

“Texas is a huge game for us,” Colvin said. “We just have to be prepared for this, and I think we are.”