Correspondence with the Oklahoma Daily: The Texas side of Saturday’s game 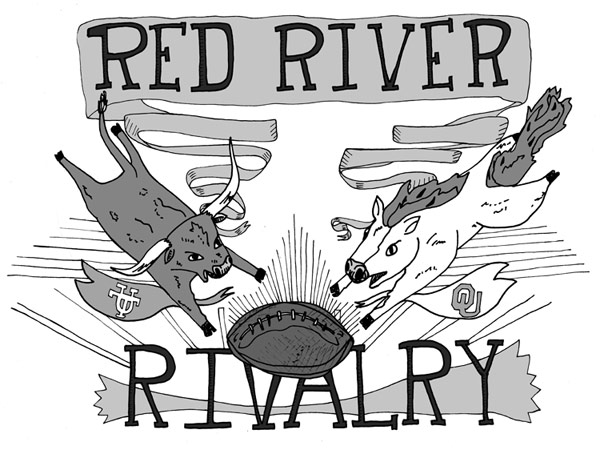 Editor’s Note: In the spirit of the University of Texas’ friendly rivalry with the University of Oklahoma, the editorial boards of The Daily Texan and The Oklahoma Daily have exchanged editorials. The Red River Rivalry, played every October in the neutral meeting ground of Dallas, is a time-honored tradition that brings out both the best and, some would say, worst in Texas and Oklahoma football fans. In anticipation of Saturday’s game, both editorials are running in Austin and Norman today.

For many years the Texas-OU game would determine the eventual conference champion and had national title implications. It would be great if both our teams were coming into the game undefeated, but sadly that’s not the case. Our season hasn’t gotten off to the best start, as we’ve already lost games to BYU and Ole Miss. But let’s be honest, you guys aren’t anything like those teams. They both won bowl games last year.

Despite low expectations, this game could still be exciting. There is a rumor that our (presumably red-shirted) freshman quarterback Tyrone Swoopes might make an appearance. If so, it could completely change the game, not only because of his speed and mobility, but also because it would allow Case McCoy to catch his breath and see a few plays from the sideline. After all, the Longhorns score more when he’s watching.

You see that, OU? We’re even better than you at making fun of ourselves.

It seems a little unfair, though, that all the revenue generated by the game each year should be in Texas. In fact, we thought about offering to have the game at the Oklahoma State Fair this year. But then again, why would we want to travel hundreds of miles just to see the fattest cows in the state when you already bring them to Dallas every year?

Of course, we do send a pretty large sum of money to OU every year in the form of out-of-state tuition from the thousands of Texas-born Sooners. But really, thank you for opening your doors to all those Texas high schoolers who were too dumb to get into a real school but too proud to go to a community college; they can only fit so many in Lubbock. Although one suggestion: Maybe this year you can use some of that money to buy your band some new sheet music so they can learn more than one song.

We have to admit, last year’s lopsided game was about as much fun as a Baylor slumber party, and this season’s performances have already required us to re-evaluate the direction of our program here at UT. So, in the spirit of fair play, we’ll let you in on some of those changes.

·    Mack Brown will be moving from the position of head coach to starting quarterback, despite trying to recruit himself to play defensive back.

·    Sen. Ted Cruz will be lining up at safety. The junior senator from Texas still has four years of eligibility and will shut down the OU pass game like it was a federal agency.

·    Mike Davis will move from wide receiver to left tackle, allowing him to use his blocking ability on every play.

·    Jaxon Shipley and Case McCoy will be joining their brothers, Jordan and Colt, to form “JC/JC,” a new Christian rock super-group. This will spare all of us from being reminded five times a game by color commentators that their families know each other.

·    We’ve retrained Miley Cyrus to start up a hostess program for new recruits. After all, if that and buying out a Spirits Halloween store was all it took for some mouth-breathers like Oklahoma State to make a conference-winning football team, we like our chances.

As you may surmise, that leaves us with a vacancy at head coach. In conducting our coaching search, we had to look at how our program’s strengths and goals matched up with potential candidates. We have lots of money, an inflated sense of ourselves and a burning desire to beat OU.

It seems the only logical fit would be the man who torched your defense. Welcome to UT, Coach Manziel!

And if some unfathomable chain of events causes us to lose the game on Saturday, then you can save this article to rub in our faces next year. Perhaps you’ll hang it up somewhere in your double-wide; there should be a nice spot between your NASCAR commemorative plates and that picture from the time you saw Josh Heupel at Applebee’s. It’s currently occupied by your University of Oklahoma diploma, but let’s be honest, you weren’t using that, anyway.

Check out The OU Daily's letter to us here.