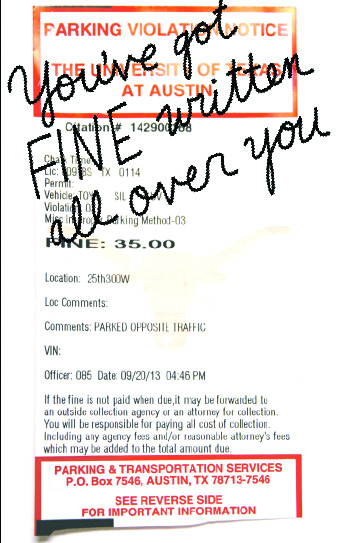 A UT parking ticket plastered onto a windshield is not something most people on campus look forward to seeing upon returning to their car — they can cost as little as $35 and as much as $400. Fees from these tickets fund UT’s Parking and Transportation Services, the same group that dishes them out.

Bobby Stone, Parking and Transportation Services director, said ticket prices around campus are decided by a transportation committee — made up of faculty, students and staff — and can fluctuate often.

A portion of Parking and Transportation’s revenue is fueled by citations, according to presentation notes from the department’s transportation committee meeting in April.

Tickets contribute 7 percent to the department’s revenue, according to the notes. Public and event parking and parking permits account for 92 percent of the revenue and brought in a daily average of nearly $2.5 million during the 2011-12 academic year.

Parking and Transportation’s duties extend beyond what its name implies; the department also oversees the regulation of vending machines around campus.

“The campus needed a group that was well-versed in handling budgets, contracts and other financial manners to oversee the university vending program and P&T volunteered,” Stone said. “P&T only receives [revenue from vending machines] to cover the cost for oversight with the remainder of the funding going back to the University to be disbursed to various University programs.”

Stone said the department issues 35,000 to 40,000 tickets per year, but could not provide an average of daily citations. Stone said Parking and Transportation does not enforce a citation quota around campus.

Stone said ticket prices changed many times on a case-by-case basis over the years.

In accordance with fees incurred from the Americans with Disabilities Act, citations for illegally parking in a handicap-accessible parking spot have doubled in recent years from $100 to $200. Stone said repeat offenders risk paying up to $400 for each additional violation.

Stone said some of the revenue collected from citations can cover operational costs.

“If we have to move an illegally parked car, money from those relocation citations goes directly to the towing company,” Stone said.

Stone said Parking and Transportation is a 100 percent self-funded auxiliary department of the university.

“This means that everyone who parks on campus pays,” Stone said. “Citations are issued to protect the spaces that faculty, staff and students have paid to utilized.”