Robinson views pressure as an opportunity to improve defense 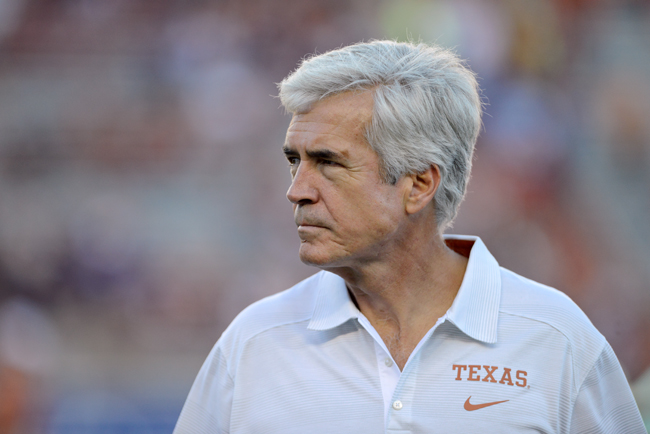 Defensive coordinator Greg Robinson has stood on the field of the Cotton Bowl once before. It was 2004 and three months before he helped lead Texas to a Rose Bowl Championship.

“I don’t know if I’ve ever had more fun at a game,” Robinson said. “I hated it that we lost, but man it was just a great experience. But it was a great game and it was so unique. You know I’ve been to the Cotton Bowl before coaching, but it was nothing like what that was like.”

Robinson, just one month after taking over the defensive play caller duties from Manny Diaz, has a much larger task on his hands. He not only faces the pressure of playing against Oklahoma but the pressure of getting a defense back on track that has given up an average of 28.4 points per game this season.

Robinson took over a defense that was, statistically, the worst defense in school history in 2012. Since his arrival back in Austin, he has led a team that has given up an average of 401 total yards of offense per game, 168 of which come on the ground — a slight improvement to the performance Diaz had in the first two games of the season.

The veteran coach, who has tallied two Super Bowl championships, is stepping up to the pressure and looks at it more as an opportunity instead of a hindrance.

“It’s Oklahoma week,” Robinson said. “I would have to think that every year that this is the game that you want to play. This is what it’s all about, and the pressure of wanting to win and beat them is exciting. It’s an opportunity for all of us. I think that’s how you look at it. So that’s the challenge and I think we are all pretty excited about accepting that.”

Robinson has seen improvement since he’s taken over as defensive coordinator. One of the new strong points he’s discovered is communication among his players, who agree the defense is becoming more vocal.

“In the defense, you have the linebackers calling the plays but now once the linebackers make the plays, we have all the safeties and all the D-line talk to each other to know that everyone is on the same page and so everyone can play as one defense,” senior defensive lineman Chris Whaley said.

Robinson took time to adjust to his new team before he was able to make these improvements. But after a month in the play caller spot, he’s started to click with his team.

“After that first week everybody kept working and coaches were helping them out a lot,” Whaley said. “So we’re used to him pretty much. Its like we’ve known him for a long time now. We come out for practice and it’s nothing different.”

Having now found a niche in his role as defensive coordinator, Robinson wants to get the Golden Hat back to Texas.

“I think it is an opportunity for us,” Robinson said. “Really, I think doggone it, you know we want to get it back on our side. So I’d like to think that is the mindset of everyone that is involved with it. We all feel like we have a responsibility to our Texas fans.”