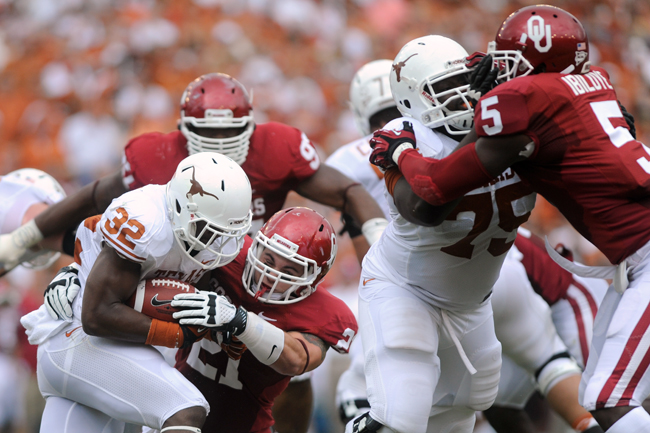 The 108th Red River Shootout is two days away, and the pageantry of the weekend and intensity of the game mark this event for what it is — the biggest rivalry weekend for both Texas and Oklahoma, and the one game that can make or break a season.

But the attention paid to this game brings into focus a hole in the schedules of both teams, where another great rivalry once held a spot. In recent years, Texas A&M left the Big 12 for the Southeastern Conference and Nebraska escaped to the Big 10, and along with them went two of college football’s most compelling matchups.

Oklahoma still has a natural rivalry on its schedule in UT, but replacing A&M on UT’s schedule seems a little forced.

While conference realignment has cost football fans a handful of epic Saturdays and brought us to the absurd point where the Big 12 has 10 teams and the Big 10 has 12, at least UT fans have been left with a somewhat intact league centered around relatively sensible geographic rivalries.

Last season, UMass made the jump from FCS to FBS and could only convince the Mid-American Conference to take it on, meaning its schedule is filled with the likes of Bowling Green and Central Michigan — not exactly natural enemies of the football-loving New Englander or an easy trip for fans with jobs.

Further changes are coming after this season when the Bowl Championship Series gives way to a new, not-yet constructed playoff system. The prevailing inclination seems to be to set up a half dozen 16-team super conferences, which almost assuredly means longer road trips for everyone.

Football, and the television money it brings, is the impetus for this extended travel. But football is the sport least impacted by the demands of a conference with bloated geographical reach.

Games are on the weekends, minimizing time out of class for players and student staffers, and the money is there for chartered flights and good hotels. For athletes who play two or three times a week and don’t get the acclaim of their gridiron compatriots, extended road trips can be devastating to grade point averages and sleep cycles.

Hopefully the NCAA will set up new conferences with this in mind.

With the speed at which the sands under college football’s landscape are now shifting, the NCAA may not even end up being the long-term administrator of the new playoff system.

Although there are a few conference commissioners who would be overjoyed if this were to happen, it would push college football one step closer to quasi-professional status.

And although UT fans will disagree on whether the professionalization of college players is viable or wise, none of them want to be force-fed Arkansas State or Northern Arizona as league rivals in the newly formed Southern Dry State MegaSuperConference.