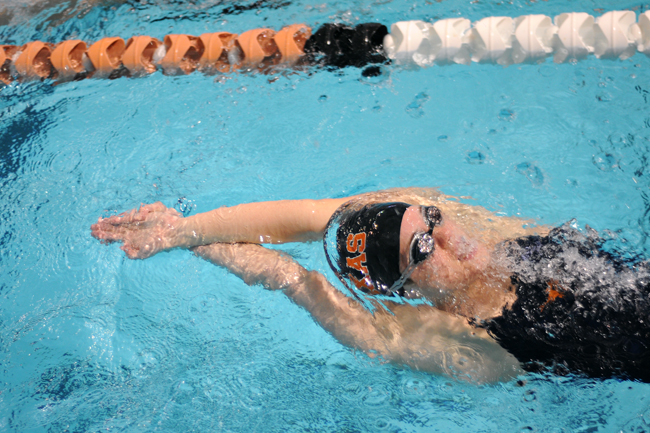 Head coach Carol Capitani and her staff look to have a strong team, a favorable mix of youth and experience excited to establish themselves as national contenders, beginning with their first opponent.

“Our fall training has been going really well,” Capitani said. “I think the thing I like most is that we have 10 new kids.”

With a freshmen recruiting class ranked 11th in the nation by swimswam.com, the Longhorns are poised to make another run for the conference title under second-year coach
Capitani. Named conference coach of the year in 2013, Capitani came to Austin after spending 14 seasons on the coaching staff at Georgia — a historically prominent program.

“It is a very hardworking group of girls,” senior freestyler Samantha Tucker said. “They get after it every single day.”

“There is a lot of healthy competition, and it has been a lot of fun,” Capitani said of the team’s practices.

The Longhorns also boast one of the top diving programs in the country, including two divers with international competition experience in senior Maren Taylor and freshman Murphy Bromberg.  Both can be expected to contribute heavily to the team’s point totals, but fans will have to wait to see the divers, as the event will not be included Friday.

While another Big 12 Championship is a reasonable expectation, the team resists complacency.

“I think that is the main priority, just improving every year,” Tucker said.