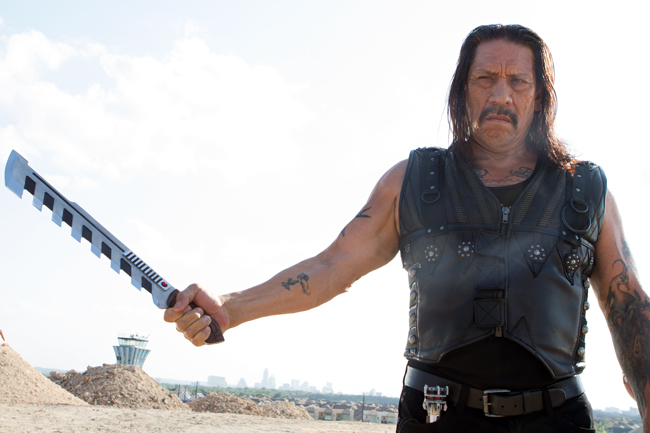 “Machete Kills” may be the only film in history to open with a trailer for its sequel, the potentially upcoming “Machete Kills Again … In Space.” What seems like a one-off joke, a nod to the “Machete” franchise’s humble beginnings as a fake trailer in “Grindhouse,” slowly becomes the focus of “Machete Kills.” The result is a film far more interested in a potential sequel than telling its own story, mixing in unwelcome serialization among enthusiastic pulp and moments of sublime
bloodletting.

Danny Trejo returns as the heroic Machete, an un-killable whirlwind of spinning blades and spurting blood. After a failed drug bust in Arizona, Machete finds himself at the mercy of the local cops. Thankfully, the President (Charlie Sheen) comes to his aid, recruiting Machete to head south of the border to kill a terroristic drug-lord-turned-mercenary. The resulting adventure takes Machete across Mexico and into the lair of a ruthless weapons manufacturer, Voz (Mel Gibson).

What made the first “Machete” so much fun was the sense of elated shock that someone actually gave Robert Rodriguez money to turn a fake trailer into a real movie. Here, the shock has worn off, and Rodriguez settles for a film that’s equal parts rehash and expansion. “Machete Kills” doesn’t seem to be particularly interested in its lead character, using Machete as a vehicle to introduce a wacky ensemble of killers, hookers and revolutionaries.

There are some moments of casting brilliance to be found in Rodrguez’s impressive cast ensemble. Cuba Gooding Jr.,
Antonio Banderas, Lady Gaga and the eternally underrated Walton Goggins all play the same character in one of the film’s most reliable sources of laughter and bafflement. The film’s MVP is Gibson, who has a blast as Rodriguez’s take on a Bond villain, complete with a ridiculous lair and endless numbers of henchmen. Gibson tears into the role with infectious enthusiasm, getting many of the best lines and bravely shouldering the film’s most preposterous material with the ease of a
seasoned professional.

When “Machete Kills” doesn’t get lost in its grand ambitions, it’s quite fun. The plot moves quickly, gleefully stretching the boundaries of science with a host of impractical weapons and implausible murders. Newcomer Kyle Ward’s screenplay is surprisingly witty, and Ward provides the actors with plenty of well-phrased one-liners. Unfortunately, it can’t keep “Machete Kills” from indulging in its own worst impulses, often to disastrous effect.

“Machete Kills” is unsatisfying by design, scuttling its own narrative halfway through to set up a third film. This is also where it tests the audience’s suspension of disbelief. While it’s easy to accept Machete dodging multiple walls of bullets in the context of the film, once Rodriguez starts introducing superpowers, resurrections and “Moonraker” riffs into the proceedings, the film gets a bit silly. The film also puts an undue amount of faith in the effectiveness of CGI blood, apparently choosing to entirely forego practical effects in favor of their less-convincing cousin.

“Machete Kills” still knows what the audience is looking for in a “Machete” film, and when it can keep its head out of the stars, it delivers. Though the film narratively sidelines its lead character, it manages to deliver hilariously improbable demises, a shamelessly convoluted plot and an inconsistent but entertaining installment in the “Machete” franchise.