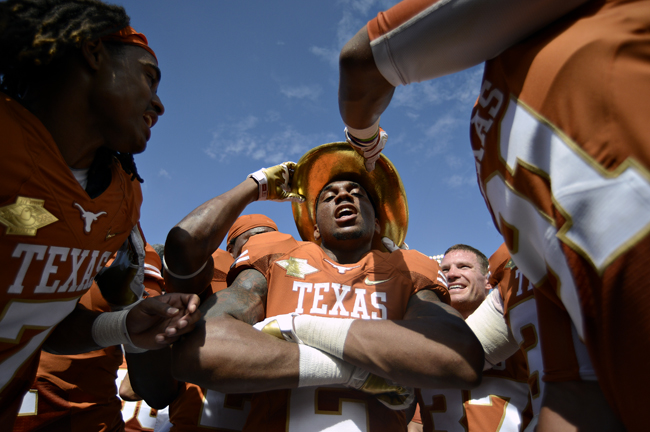 Check out photos from the game by The Daily Texan staff.

DALLAS — Four years and a different McCoy ago, the Longhorns last beat the Sooners in the Red River Rivalry.

But unlike the past three years, Oklahoma fans vacated their seats early while the Longhorn fans stayed to watch their team take a 36-20 victory against the No. 12 ranked Sooners.

It was a sight Texas hasn’t seen since 2009. The players in burnt orange, with toothy grins on their faces, held up the Golden Hat — the trophy given to the annual victor since 1941 — at the 50-yard line of the Cotton Bowl. By early in the fourth quarter, half of the cement-clad stadium was filled with burnt orange while the other half was spotted with areas of maroon and empty seats.

Undefeated Oklahoma came into the game as the favorite with a -13.5 spread, the largest in series history.

Both teams exchanged field goals to start the game but from then on it was all Texas. With the score tied in the first quarter, senior defensive tackle Chris Whaley intercepted Oklahoma quarterback Blake Bell’s pass and returned it 31 yards for a touchdown, which helped set the tone for the eventual upset.

“I didn’t dream about getting a pick six, but I did dream about making a big play,” Whaley said. “And it came true. It actually did surprise me when the ball hit me in the hands. But when I was running, all I was thinking about was scoring.”

In the second half, the Sooners were able to add three points to their board early, but soon after, sophomore running back/wide receiver Daje Johnson responded with an 85-yard punt return for a touchdown. That was just one of many plays that helped add momentum for Texas.

“[Confidence] is a great feeling for us,” junior running back Malcolm Brown said. “A lot of us have been waiting a long time to wear that hat and just to get that is great. It’s a blessing to be on this team. Just to forget about that negativity and just play. That’s what we did today.”

The Longhorns recorded 445 yards of total offense through four quarters while holding the Sooners to just 263 yards.

On the other side of the ball, unlike their games against BYU and Ole Miss, the Longhorns were able to stop the run and cease any big plays on the ground. Texas held the Sooners to just an average of 3.9 yards per carry.

“I think it’s really amazing to see what [defensive coordinator] Greg Robinson and the other three defensive coaches have done to tie this together to put in the run stopping defense and do what they did today,” Brown said. “It’s just amazing to see after Brigham Young what they have become.”

After beating Oklahoma, Texas remains undefeated in conference play and keeps its spot atop the Big 12. The Longhorns have a week off before heading to Fort Worth to play Texas Christian University on Oct. 26.

“What I’m excited about is what comes after this game,” McCoy said. “You can study the history of Texas. When we win this game our season tends to go where we want it. When we don’t win you can see how it’s gone the past few years. That’s what I’m most excited about.”