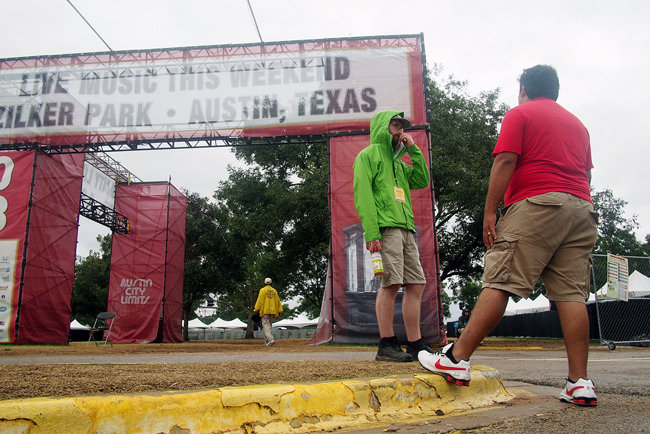 Organizers cancelled the final day of the Austin City Limits Music Festival on Sunday because of heavy rain and flash flooding at Zilker Park.

“Our first priority is always the safety of our fans, staff and artists,” Shelby Meade, C3 Presents communications director, said in a statement. “We regret having to cancel the show today, but safety always comes first.”

Smallpools guitarist Michael Kamerman, whose band was scheduled to play Sunday, said the band members realize there is nothing they can do about the festival’s cancellation.

“We are definitely upset about the circumstances that led to ACL being cancelled for the day, but when Mother Nature calls there isn’t much to argue, unfortunately,” Kamerman said. “We flew in from New York, and our crew drove out from Los Angeles just to be here, so we feel the pain of all who came to town this weekend for a concert.”

The Mowgli’s, another band that was scheduled to play on Sunday, played two alternative shows, including a last-minute acoustic set for charity at a downtown homeless shelter.

“We’re gonna play at/near a shelter [downtown],” the band said in a tweet sent from its official account. “Admission is anything a homeless person might need.”

“It was so awesome of them to turn a bad situation totally around,” Meyer said. “So many people were upset about ACL being cancelled, but this spontaneous show totally turned the day around.”

Other bands that rescheduled include Atoms for Peace, The Lone Bellow, Franz Ferdinand and Noah and the Whale.

ACL officials said they would mail patrons a refund equalling one-third of the tickets’ original prices, but students who bought their tickets from third-party vendors will likely not receive this refund.

Economics junior Pooja Prabhakar said she bought her wristband through Craigslist, and although she emailed the person she bought it from, she doesn’t expect to receive the refund money.

“It’s kind of annoying just because the person that sold me the wristband [is] pretty much making a profit right now, but I guess there’s nothing I can do about it,” Prabhakar said. “[ACL] can’t track down everyone that bought it from a third party vendor.”

Biochemistry senior Andrea Curo said although she paid for a three-day pass, she was only able to go to the first day of the festival.

“I’m really bummed out because I actually skipped [Saturday] and planned to go [Sunday] because I had a lot of work to do,” Curo said. “I just paid for Friday, and I have to miss Phoenix, and Phoenix is the headliner I was really looking forward to.”

Zilker Park is scheduled to reopen on Oct. 26, though it is possible that extensive flood damages might result in a delay.