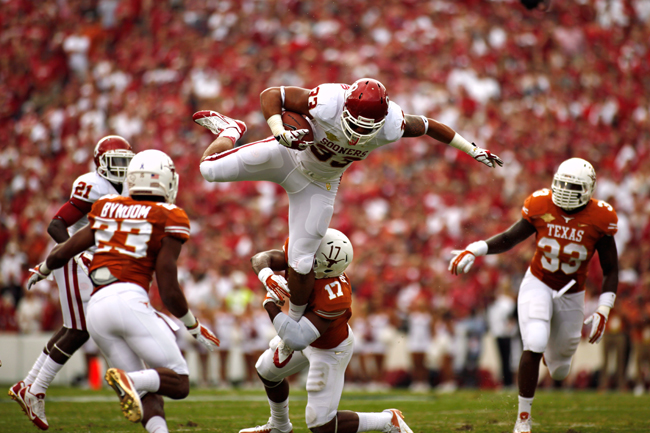 Texas’ 36-20 upset victory over No. 12 Oklahoma shattered the point spread and ended a three-game losing streak against the Sooners. Here are four things that propelled the Longhorns to victory.

A potent run game paced the Longhorns on offense throughout the game, allowing Texas to sustain a number of lengthy scoring drives.

Sophomore running back Johnathan Gray continued his sizzling play of late with 128 rushing yards on 29 carries. Junior running back Malcolm Brown tallied an additional 120 yards on the ground, marking the first time in school history that two backs each compiled more than 100 yards in a game against the Sooners.

Senior quarterback Case McCoy said early in the week that earning a win against Oklahoma could define his legacy with Texas.

He managed to do just that, completing 13-of-21 passes for 190 yards and a pair of touchdowns.

The senior’s quarterback rating of 159.8 was his highest of the season, and his 59-yard touchdown strike to sophomore wide receiver Marcus Johnson marked a season-long. After earning bragging rights over Texas A&M in 2011 in the Longhorns’ final Big 12 matchup against the Aggies, McCoy now boasts a victory against the Longhorns’ other major rival.

“It was [a] dream,” McCoy said. “I came to Texas to play in this game, and so did a lot of the seniors. We haven’t played as well in this game the last couple years, so this will be one that the other seniors and I will remember for a long time.”

The Texas defense wreaked havoc on Oklahoma junior quarterback Blake Bell throughout the game, limiting him to just 133 passing yards and a 46.2 completion percentage while forcing his first two interceptions of the season.

Additionally, the Longhorns completely disabled Bell’s ability to run the ball, and he finished the game with a net gain of -27 rushing yards on seven carries.

One of the biggest differences in the game was Texas’ efficiency throughout.

The Longhorns converted 13-of-20 third down conversions, averaging 9.7 yards per play on third down.

Oklahoma, conversely, managed a net total of -4 yards on third down and converted just 2-of-13 attempts.

In addition, the Longhorns averaged 8.6 yards per pass and 4.3 yards per carry in the game. They remained consistent on offensive throughout the game and sustained drives of at least five plays on 10 of their 12 possessions.