Texas Soccer beats Baylor Lady Bears, has yet to lose at home in 2013 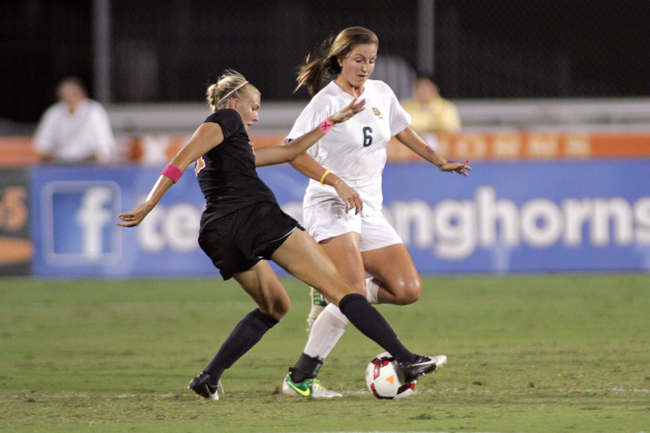 After a scoreless first half, Lachappelle notched two quick goals. Lachappelle’s goals came within two minutes of each other early in the second while Baylor (8-3-3, 1-2 Big 12) couldn’t answer until the 87th minute.

After pressuring the Bears back line and forcing back-to-back corner kicks early in the second half, Lachappelle got her head on a cross from sophomore midfielder/forward Chantale Campbell in the 48th minute. The goal was the first allowed by Baylor on the road since North Carolina beat the Bears in overtime penalty kicks Nov. 18, 2012.

Two minutes later, Lachappelle caught a cross from the right side of the field from senior midfielder Gabby Zarnegar and landed a left-footed shot to put the game away for Texas.

The two scores were Lachappelle’s third and fourth of the season, putting her in a three-way tie for the team lead with junior defender Brooke Gilbert and sophomore forward Kelsey Schimmick. Campbell and Zarnegar are tied with sophomore midfielder Lindsey Meyer for the team lead in assists with four.

Baylor’s only score came from junior forward Natalie Huggins on a rebound that snuck past sophomore goalkeeper Abby Smith. The goal was also the Bear’s only shot on goal in the second half. Overall, the teams managed the same number of shots, with Texas only having one more shot on goal than Baylor.

The Longhorns remain in second place in the Big 12 standings with a 4-0-1 record. They are a half game behind conference leader West Virginia with only two regular season conference matches left. Texas will play Oklahoma State in Stillwater on Friday before returning home to finish the regular season against Oklahoma on Sunday.