What Miley means for Millennials 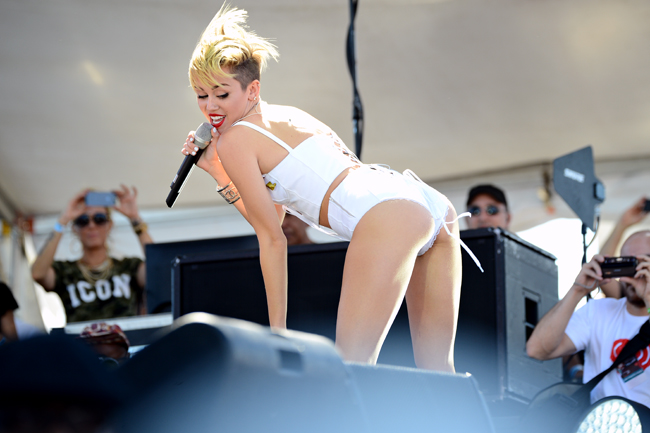 Miley Cyrus is a hot topic. Her recent performances, characterized by nudity, hypersexualization, and a lot of twerking, have gained her a great deal of attention in the American media. These performances raise interesting and nuanced questions about society and our place in it. College students are, like Cyrus, members of a new generation, the Millennials, who are forming and reforming our identities through the landscape of our educational and social environments. Therefore, Cyrus’ choices and actions, as distant as they might seem from ours, highlight trends in our society that we should be aware of, as these trends may have serious and dangerous consequences.

It would seem that part of Miley Cyrus’ new persona is an attempt to reinvent herself in her industry. But why did Miley choose this path for her reinvention? Of course, there is no perfect answer to this, but there are some speculations. In an open letter to Miley Cyrus, Northern Irish singer Sinead O’Connor says that Cyrus is allowing herself to be prostituted by her industry because, as the adage goes, sex sells. In other words, Miley may have seen before her two choices: Either she could risk invisibility in an increasingly competitive and ruthless business, or she could use her sexuality to ensure that she stays in the spotlight.

Then again, Cyrus may have also seen her choice from a different perspective: that of a young adult practicing at growing up. As a younger person, Cyrus expressed herself in a more “wholesome” way. Now, she’s trying to express herself through sexual appeal. Although her intentions may be self-motivated, the reasoning that “you’re just expressing yourself in a world that is trying to keep you down” is a tool often used by producers and directors to exploit young women — women like Cyrus.

Cyrus may see herself as rebelling against a repressive system, but is she really? Many female performers have experienced similar periods of sexual rebellion — Britney Spears is a prime example of this.  Some argue that this type of sexuality actually serves to objectify women further.

But what do Cyrus’ choices mean for others in her generation? In some ways, Cyrus is very different from the average 20-something — if I had a nickel for every time Steve Carrell shook his head angrily at me, I would have zero nickels. Cyrus would have enough for a steak dinner. Yet in some ways, she is also very similar. Around college campuses like ours, it is not hard to find young people trying to reinvent themselves, and these young people are faced with similar choices, especially in regard to expressions of their sexuality.

Cyrus’ choices raise questions of what is and should be acceptable in terms of displays of sexuality. Journalism professor Robert Jensen explained it nicely. Jensen said that we are forced to look at sexuality through a dichotomous framing: Either we can retreat to a virginal image and completely resist displays of sexuality, or we can accept objectification of our bodies by not resisting at all. This limited framing is especially true for women.

In a recent interview with Rolling Stone magazine, Miley Cyrus discussed her VMA performance with Robin Thicke. “No one is talking about the man behind the ass,” Cyrus said, and this statement is rather astute. As a woman, her behavior is scrutinized in a way that it probably wouldn’t be if she were a man.

I do not seek to criticize Cyrus’ choices as being good or bad. Rather, I believe she provides us with an interesting dialogue about the choices and expectations for not just women, but all people of our generation. Growing up, we are socialized into a culture that we end up accepting, because we don’t know that anything else is possible. As we search for our identities in this tumultuous time of young adulthood, we need to be aware that our choices may be rooted in something deeper, and that we need to be critical of our culture in order to understand our own actions.

Franklin is a Plan II, linguistics and Middle Eastern languages and cultures senior from Sugar Land.