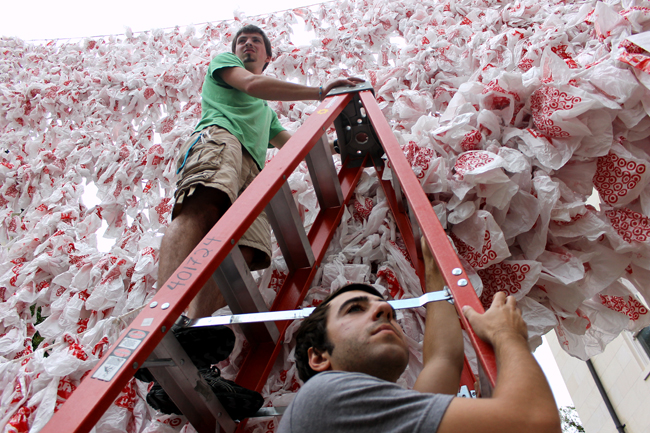 A curtain of trash bags — 17,000 of them — has been hung between the Goldsmith Hall and the West Mall Office Building as part of a UT Center for American Architecture and Design art exhibit installed Monday.

The exhibit “Curtains,” is a showcase of various interpretations of draperies meant to exemplify how they can divide and create space. 164 different curtain designs were submitted to a contest held by the American architecture and design center, and, of those entries, six are being built as real installations for the exhibit. Five of the entries, including “Plastic Poetry,” the curtain of trash bags, have already been installed. The last installment, which will feature helium balloons, will be completed by Wednesday, the same day as the lecture and reception for the exhibit.

Michael Benedikt, School of Architecture professor and director of the American architecture and design center, helped create the contest. The exhibit was inspired by how infrequently architects use curtains as a subject, Benedikt said. He said the benefits of drapery are often overlooked for the hardness of some modern architecture.

“[A curtain] filters light, absorbs sound, creates privacy and enables you to move through things,” Benedikt said. “They’re adjustable — they soften the space so the space is not so hard. I hope [viewers] think about the beauty of curtains and using them.”

Benedikt, along with UT professors Clay Odom and Coleman Coker, began overseeing installation last week. One piece, made of tulle, had to be taken down and then reinstalled after the rainstorms.

Johanna Spencer, an architecture student of Benedikt’s, helped set up the installations along with her classmates.

“It’s been incredible,” Spencer said. “There’s a lot of detailing involved in it and a lot of physics that you didn’t think of before.”