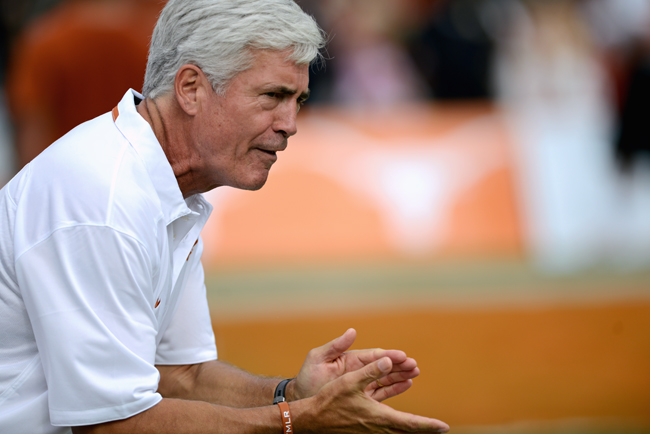 Following the dismissal of Manny Diaz as defensive coordinator, Texas’ team and fans were in desperate need of a change. So naturally, when head coach Mack Brown named Greg Robinson the new defensive coordinator following the Longhorns’ blowout loss to Brigham Young University, people rejoiced more about Diaz’s departure than the arrival of the new face to the Texas defense.

But following Texas’ most dominant defensive performance against Oklahoma in recent memory, it’s clear that Robinson isn’t just a stopgap until the end of the year — he made this defense believe.

His impact is most evident in the areas where Texas was weakest: putting pressure on opposing quarterbacks, causing turnovers and most importantly, rush defense.

Under Diaz, Texas’ front four struggled to generate consistent pressure, combining for a single sack in the team’s first two games. But in the four games following Robinson’s promotion, the group totaled 10 sacks, two fumble recoveries, two interceptions and one touchdown. Senior defensive end Jackson Jeffcoat has been especially dominant in that stretch, racking up five sacks and a game-sealing interception against Iowa State.

Thanks to a rejuvenated pass rush, the Longhorns have been more active in the turnover category as well, forcing eight in the last four games — most memorable being senior defensive tackle Chris Whaley’s pick-six against Oklahoma on Saturday. It is plays like Whaley’s, which gave Texas a 10-3 lead it never relinquished, that can reverse the flow of an entire season.

But the most drastic change came with Texas’ run defense. It was only five weeks ago when BYU rushed for a school-record 550 yards against Texas, resulting in Diaz’s dismissal.

With Robinson at the helm, things have changed drastically. Since a 44-23 loss to Ole Miss in which the Longhorns surrendered 272 yards on the ground — Robinson’s first game in his new role — this defense has stepped up, surrendering 446 rushing yards the past three games. Saturday’s performance against Oklahoma was especially impressive, as Texas held Oklahoma to 130 yards on the ground, well below the 246 yards per game it averaged entering the game.

The defense is totally different than the one that was on the field a month ago, and a big part of that is Robinson. The results reflect an alteration in coaching and schematic approach but more so, they show a change in the team’s mental makeup. The Longhorn defense no longer appears timid or uninspired. Led by Robinson, this team is playing motivated defense.