Texas Longhorns anxious for what’s ahead after OU upset 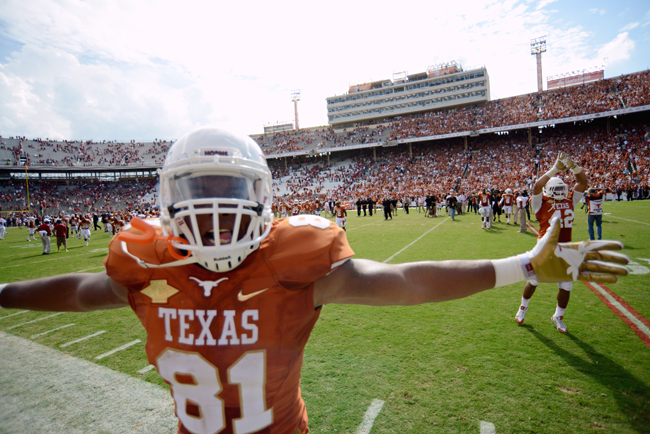 Longhorn tight end Greg Daniels celebrates his first Red River Rivalry vicotry after defeating Oklahoma Saturday. Texas is now one of only three Big 12 teams that remain undefeated in conference play. If the Longhorns can stay hot and win the Big 12 this year, they will play in their first BCS bowl since 2005.

Before Saturday, the last time Texas beat Oklahoma no one knew what an iPad was and flip phones were still going strong. But most Longhorn fans remember Texas being one Colt McCoy injury away from their second national title in four years.

To the surprise of most, Texas, a 13.5-point underdog, dominated the Sooners this past Saturday at the Cotton Bowl. The Longhorns upset 12th-ranked Oklahoma 36-20, their first win over the border-state rival since 2009. Now, with half its season left, Texas is anxious to reach what could potentially come next.

“You can study the history of Texas and when we win this game our season tends to go where we want,” senior quarterback Case McCoy said. “When we don’t win, you can see how it has gone the last couple of years. I am excited about where this team is headed after this game.”

Before the season started, head coach Mack Brown talked up his team and promised Texas would get back to national championship contention. But talk halted when the Longhorns lost back-to-back non-conference games against Brigham Young University and Ole Miss.

After those losses, the Longhorns’ only hope of survival was a conference title.

Following a win over Kansas State — their first victory against the Wildcats since 2003 — and a narrow escape against Iowa State, Texas turned to Oklahoma, a game that’s always the biggest obstacle of the season.

“I think they [games] are all important but especially this game, the Oklahoma game,” co-offensive coordinator Major Applewhite said. “We understand that things can flow either way each and every week. I think it [the win against OU] was every bit as important for Coach Brown as it was for me, as it was for the equipment manager, as it was for [running back] Johnathan Gray.”

The win against a highly ranked team is great, but the Longhorns’ biggest achievement may be the confidence gained.

“We proved to not only everyone else, but also to ourselves that we can play with the best of them,” McCoy said.

Texas’ triumphed at the Cotton Bowl, but the group still believes there is room to improve.

“[The OU game] certainly shows where we can go,” senior defensive end Jackson Jeffcoat said. “We can definitely get better than that. We still made mistakes that we are going to go back and look at. You always have to do that. You can’t always be satisfied because you got the win.”

Texas sits atop the Big 12 at 3-0 alongside Texas Tech, who is also undefeated in conference play. But the schedule doesn’t get easier for the Longhorns. A road game against TCU in two weeks will test if Texas can make their effort at Fair Park consistent.

“[We need] to build on it,” senior offensive guard Mason Walters said. “Because two weeks from now we will play a good TCU team. Thankfully we have the bye week to get everyone to stop patting us on the back and get ready to go play TCU. But that’s the focus of next week. What do we need to do to go to 4-0 in the conference?”