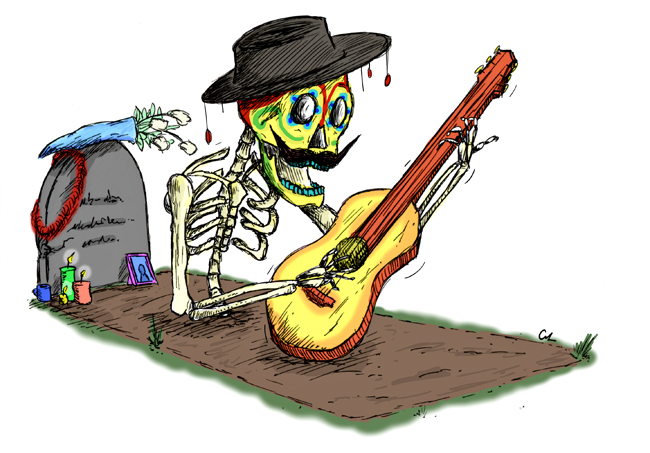 Candied skulls, skeletons, bright colors, mouthwatering food and dance-worthy music are a few of the things that come to mind when thinking about Dia de los Muertos. It is a celebration of life and loved ones who have passed on, not a solemn affair centered on death.

This traditional Mexican holiday, which takes place on Nov. 2. is coming to Austin early for Central Texas’ Dia de los Muertos Festival on Oct. 19. The festival is run by Easter Seals Central Texas, an organization that provides services such as rehabilitation, early childhood intervention and employment opportunities to members of the community who have disabilities. Easter Seals plans to host the festival for the next three years and created the event to honor the lives of the people it serves as well as members of the community.

Located at Fiesta Gardens, the festival will feature live music, a customary parade and traditional altars honoring the deceased.

“Normally [on Dia de los Muertos] you would build an altar for loved ones,” Jimenez said. “So what we are doing is we will have several people in the community build altars in honor of either loved ones, actors and actresses that have passed or their pets.”

Two of the people who are creating altars for the festivities are Josie Jaramillo and David Schneider. As a worker for Easter Seals, Jaramillo was excited to create an altar for the festival. Jaramillo comes from a close-knit family and decided to make an altar representative of her niece and parents from traditional Day of the Dead colors: purple, bright orange and yellow.

“I set up the altar and put out things they really enjoyed when they were alive,” Jaramillo said.

“I guess I’d heard of Dia de los Muertos, but I really had no idea the significance of it in the Hispanic community and what it really meant,” Schneider said. “Now that I’ve been immersed in it, it’s pretty powerful.”

He and his team worked together to create an altar honoring their grandmothers. Schneider’s altar celebrates the life of his grandmother, who recently passed away at the age of 94.

“She was one of the nicest people I’ve ever met, and one of the smartest women when it comes to people,” Schneider said. “She knew people very well and made friends very easily. She was beloved when she passed.”

Like Jaramillo, Schneider’s team’s altar incorporates traditional Day of the Dead colors and objects representative of the various grandmothers being remembered.

Schneider said he hopes others will learn more about the tradition of Dia de los Muertos and what it represents, like he has, by attending the festival.

“When you hear a term like Dia de los Muertos, Day of the Dead, it can have almost a morbid connotation to it,” Schneider said. “But it’s anything but that. Understanding what is done in that culture, celebrating life much more than mourning death is, I think, a really positive message.”