Hazardous asbestos was treated in RLM, but asbestos elsewhere on campus does not pose threat 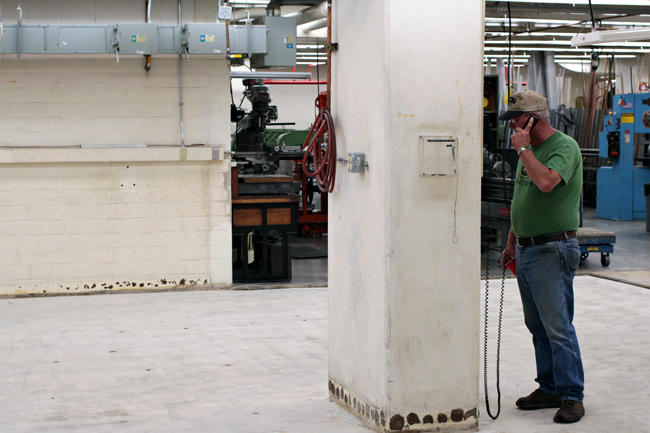 Machinist Donnie Cannon places a phone call from a recently cleansed area of the RLM’s machine shop. The floor in several rooms of the building’s basement have recently been treated for water damage.  " />

Machinist Donnie Cannon places a phone call from a recently cleansed area of the RLM’s machine shop. The floor in several rooms of the building’s basement have recently been treated for water damage.

Exposed asbestos in Robert Lee Moore Hall was treated Tuesday, but many older UT buildings still have asbestos in their insulation.
The treatment was completed after the fibrous material was found on the third floor, which could have become a hazard to students and faculty.

Asbestos, a group of naturally occurring fibrous materials, was used for insulation in many campus buildings built before the 1980s. It often makes up the insulation around pipes and ceiling tiles and can be found in several types of glues and caulks.

Chip Rogers, associate director in the department of Environmental Health and Safety, said asbestos is not hazardous if it is undisturbed.

Rogers said that if the floor had not warped then there would have been no reason to remove the asbestos because there would not have been a threat to human safety.

“Asbestos is only a problem if it is dry and in the air,” he said.

Rogers said the University has a well-organized procedure for handling asbestos and said it is usually just removed on an as-needed basis to avoid student exposure.

“If the world was a perfect place, we could go through every building,” Rogers said. “But it is impossible to do that.”

If inhaled, asbestos fibers can penetrate lung tissue and stay in the body, which could lead to asbestosis, lung cancer or mesothelioma.

Biology junior Karen Slater said she would not want to be in a room that is polluted and said she is pleased the University treats buildings for asbestos.

“The side effects of exposure to asbestos last a lifetime,” Slater said. “It’s important to test the levels [of asbestos] and make sure buildings are safe, and it’s better to be safe than sorry.”

Elena Capsuto, assistant director of campus and occupational safety, said it is important to determine when asbestos is a concern, but emphasized that asbestos is not as scary as people make it out to be.

“We have procedures in place that we follow and comply with state regulations,” Capsuto said. “It’s pretty standard, it’s not dealing with anything new. We make sure it is handled properly.”