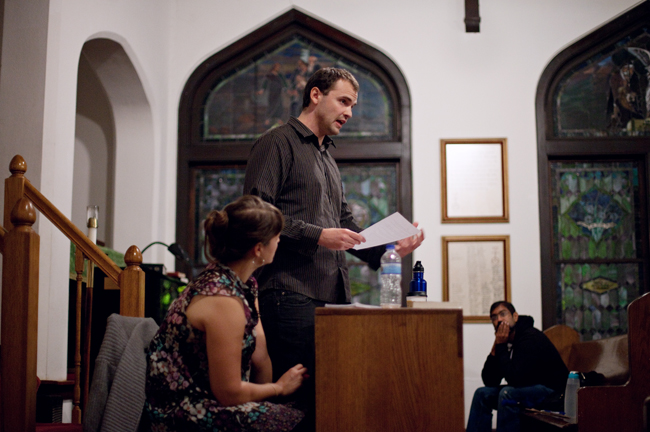 UT graduate student Adam J Tallman, a member of the Texas State Employees Union, talks about the recent shuttle route shutdowns at the Neoliberalism and the Corporate Takeover of UT Austin meeting on Wednesday night. The meeting was sponsored by the International Socialist Organization. " />

UT graduate student Adam J Tallman, a member of the Texas State Employees Union, talks about the recent shuttle route shutdowns at the Neoliberalism and the Corporate Takeover of UT Austin meeting on Wednesday night. The meeting was sponsored by the International Socialist Organization.

Shuttle route cuts caused by a lack of funding and a new smarter service system were a few of the concerns expressed by students in the International Socialist Organization at a forum Wednesday.

The forum, at the Congregational Church of Austin, addressed the Cameron Road and Wickersham Lane shuttle routes because of low ridership and limited funding from the University to Capital Metro. Adam Tallman, linguistics graduate student and member of the Texas State Employees Union, said limited funding should not have been a problem if the University did not spend its money on things such as the Shared Services plan.

The Shared Services plan’s goal is to reduce the work force of administration by 500 jobs over four years. The pilot program of Shared Services will be implemented before actually applying the plan.

Tallman traced the roots of the current political climate of UT and highlighted forms of resistance during a speech.

“UT administration refuses to show evidence to the public regarding privatization and justified cuts based on the budgetary crisis,” Tallman said.

Following Tallman’s speech, students spoke about the rising cost of tuition. Although students who spoke largely opposed the financial plan that is still in the works of being implemented, the University’s stance is that the administrative system needs to be replaced and a modern system should be implemented.

Kevin Hegarty, vice president and chief financial officer of the University, said during an interview that the shared services model’s goal would be to make sure few jobs are cut and have employees do the work of multiple people. The plan is projected to save $280 million to $320 million over 10 years.

“We can sit still and do exactly what we’re doing and have to cut almost 500 jobs, or we can take a different action and redesign a new construct ourselves that we think works with our campus,” Hegarty said.

Kelly Booker, information studies graduate and full-time employee at the Tarlton Law Library of the School of Law, said she disagrees with the idea of “less people doing more work” because they will not receive more money for the extra work they do.

“For those of use that are lucky enough to keep our jobs, it means we’re working more for less money,” Booker said.

Clarification: An earlier version of the story used the word "faculty" to describe all employees.