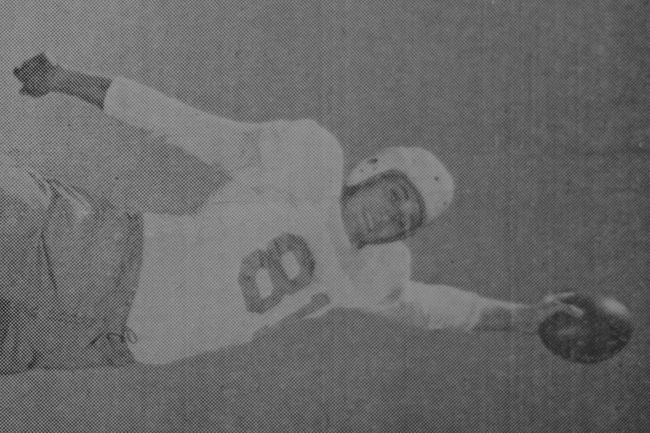 The cheers that erupted from Dallas’ Cotton Bowl Stadium on Saturday follwing the Longhorns’ upset win over the Sooners echoed similar cheers from another era: the Red River Rivalry game 68 years ago.

On Oct. 13, 1945, the Longhorns made the annual trek to Dallas to face Oklahoma just as they did this past weekend, but with one critical difference: The 1945 Texas team had a 6-0 winning streak over the Sooners.

The Longhorns might be hit-or-miss, but back then, Texas football reigned supreme and the fans were just as devoted as they are now.

The Hook ’Em hand sign might not have been invented yet, but Texas fans found other ways to express their enthusiasm. In a 1945 article, Bill Johnson, a sports writer for The Daily Texan, wrote that thousands of fans made the journey to Dallas to support the boys in orange and white in the 40th annual matchup between the two schools.

UT students joined with the band to rally the players last week for the game. The University held a send off in 1945, too, which according to the article did not have its usual large attendance that year but was still spirited. The send off included the Longhorn band, members of the UT community and a multitude of cheers.

Johnson said Texas fans were as vocal as ever: “a roar of ‘L-O-L-O-L-O-N-G’ greeted the Longhorns in their dressing room.”

Following the Longhorns’ arrival in Dallas for the ’45 Shootout, the city hosted a torch-lit parade with Dallas city officials and the Cowboys in attendance.

Even though this year’s Red River Rivalry was estimated by Forbes to have an attendance of nearly 40,000 Oklahoma fans alone compared to the 40,000 total in attendance in 1945, the traditions and record of the rivalry have not changed all that much.

A recent article on ESPN.com indicates that wins have been shuffled back and forth between Texas and Oklahoma for at least the past 25 years, with each school taking two or three wins in
a row.

But as in October 1945, it’s the favorite that often comes up on top. One such exception was 1989 when the Longhorns snatched the victory, led by quarterback Peter Gardere — who offered the 2013 squad much-needed advice in the ESPN article.

“The rankings mean nothing in this game,” he said. “Really strange things can happen.”

And indeed it did come as a great shock when, after three years devastatingly devoid of a Longhorn win over OU, Texas finally seized a 16-point victory this year.

The Red River Shootout and the teams themselves have changed tremendously since the beginning of Texas-Oklahoma matchups 108 years ago, but one thing is certain: The fierce rivalry is still alive and UT fans are just as devoted as they were when they trampled Oklahoma back in ’45.

And regardless of whether it’s 1945 or 2013, most Longhorns tend to agree that OU still sucks either way.