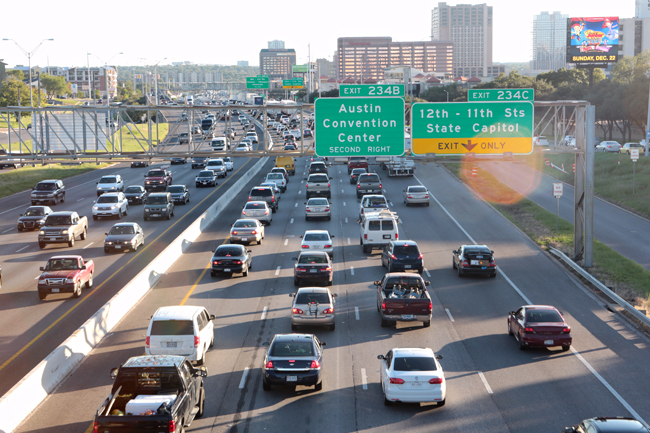 Traffic backs up on I-35 south of Martin Luther King Jr. Blvd. during rush hour.

Many UT students have to travel to class by car — a process that can consume a large portion of the day depending on traffic, but will hopefully be addressed through a $1.7 million federal grant for UT to research the behavior of commuters through real-time wireless data analysis.

Austin has the fourth worst traffic in the nation, behind Los Angeles, Honolulu and San Francisco, according to the INRIX index.

The new Data-Supported Transportation Operations and Planning Center will research ways to combine wireless sensor networks and traffic modeling systems to gather data that can immediately be analyzed by researchers in order to improve the daily commuter’s experience, center director Sanjay Shakkottai said.

In the last 20 years, Austin’s population has doubled, according to the City of Austin website.

Jennifer Duthie, scientist at the University’s Center for Transportation Research, said the University now has the resources to work toward solving the traffic problem.

“It’s clearly more congested, but we don’t have a lot of room to build more roads,” Duthie said. “Nonetheless, there are different ways to address this issue.”

Shakkottai said the U.S. Department of Transportation’s recent classification of UT as a Tier One University Transportation Center has given them the duty to research innovative methods of improving city planning.

“We were given the national tier one status to enhance economic competitiveness, improve safety and build communities,” Shakkottai said. “Our three main goals are data architecture, data analysis and utilization. We see a lot of potential to harness information from a lot of sources and a lot
of data.”

Shakkottai said with greater technological capabilities, cars could be tracked by sensors as they drive through the city, collecting traffic data.

“We are very excited. Technology and wireless communication provide information in real-time, which can be used to improve safety, accident response and reliability,” Shakkottai said.

Shakkottai said the various disciplines of engineering at the University can collaborate to produce technology that will overcome the stresses on public infrastructure of recent growth.

“Austin has been growing and it will probably continue,” Shakkottai said. ”With advanced technology and advanced techniques, we can take advantage of the resources here.”

Shakkottai said UT has been given the responsibility to develop a model for the rest of the United States.

“We are going to use Austin as a test bed for procedures and analysis to be used for national input,” Shakkottai said.