“The Fifth Estate” isn’t terrible, but it is misguided 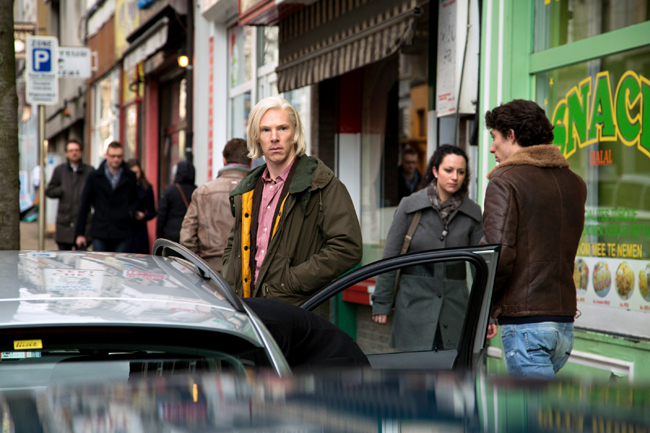 In fall 2010, as many of the events that comprise “The Fifth Estate” were occurring, Aaron Sorkin and David Fincher were receiving high praise for “The Social Network,” their adaptation of a similar story. It’s hard not to see that film’s legacy all over director Bill Condon’s attempt to chronicle Julian Assange’s propulsive journey to the spotlight of the information age, but his thematically-muddled approach and only sporadically-interesting narrative render “The Fifth Estate” a frustrating missed opportunity.

The film takes a familiar approach, focusing on the partnership between Daniel Domscheit-Berg (Daniel Bruhl) and Assange
(Benedict Cumberbatch). Domscheit-Berg is initially drawn to Assange for his wild aspirations of exposing the truth while protecting his sources. But as WikiLeaks stumbles upon its biggest story yet, tensions between the two come to a head.

In Condon’s struggle to make characters sitting at computers visually interesting, he infuses “The Fifth Estate” with a grand visual metaphor. Every time Condon cuts back to this visual representation of a digital organization, it becomes less effective. By the end of the film, he has taken it to a laughably literal level. Unfortunately, this is the only place where Condon shows any flair, and “The Fifth Estate” is a dry and flavorless presentation. From its overwrought opening sequence showing the history of information to the barrage of neon-underlined speeches the film ends with, “The Fifth Estate” is dramatically limp for most of its runtime.

“The Fifth Estate” starts to perk up a bit once it introduces a compelling moral conundrum over halfway through, but only becomes truly interesting in the moments where Condon is portraying the paranoia that threatens to swallow Assange whole. The characters embark on scholarly speeches about why Assange has changed the way information is shared, but the fullest consequences cannot be grasped yet, resulting in a story that feels unfinished.

The biggest draw for “The Fifth Estate” is Cumberbatch’s performance as Assange. Assange is written as a twitchy Zuckerberg-lite, but Cumberbatch plays him as a vacuum of charisma, utterly uncomfortable in his own skin but thrilled at the self-mythologizing that his media empire allows him. Cumberbatch’s performance is hard to latch on to, and the script’s loose understanding of Assange is reinforced in a clumsy final scene.

Domscheit-Berg’s arc is not incredibly compelling, but at least he has one. While the script is content to lead him between story beats blandly, Bruhl does his best to make a plain character arc interesting.

“The Fifth Estate” is not a terrible film. It is simply a misguided work, a film trying to capture the zeitgeist in the same way that “The Social Network” did in 2010. Unfortunately, Condon brings so little flair to his telling of the dryly-written script that it’s far easier to dismiss the film entirely than attempt to engage with its laborious 128-minute runtime.