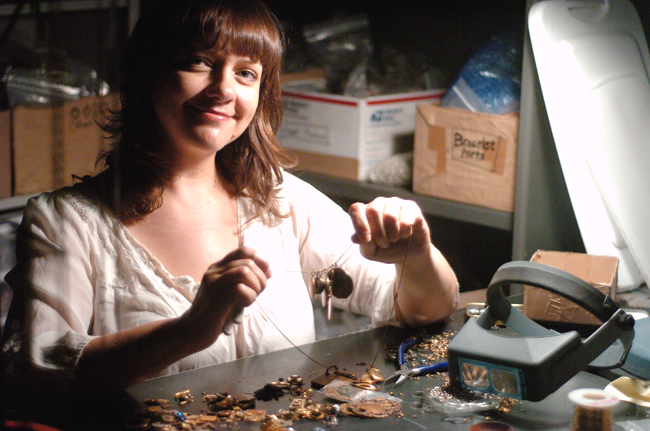 Austin jewelry maker Natalie Tischler shows how she creates necklaces for her jewelry company Ornamental Things. Tischler opened Ornamental Things after graduating in 2004 from UT with a degree in Art History. " />

Austin jewelry maker Natalie Tischler shows how she creates necklaces for her jewelry company Ornamental Things. Tischler opened Ornamental Things after graduating in 2004 from UT with a degree in Art History.

Natalie Tischler is inspired by the bravery of bold women. Owner and designer of the jewelry company Ornamental Things, Tischler harnesses this concept into every piece she creates. But Tischler may not have garnered such success without the motivation of providing for her son as a teen mother.

Tischler was 18 when she gave birth to her son Forest. Shocked and scared, Tischler did not find out she was expecting until after she moved to Austin in hopes of going to school and pursuing a career.

“I just made the decision to raise [my son] on my own,” Tischler said. “I moved back home, [then] eventually moved back to Austin, and my son stayed with [my parents] while I tried to figure out my life here and how I could support us. I think that having Forest really made me have to grow up and get focused on my life.”

Tischler spent her early 20s raising her son in Austin. It wasn’t until she was 27 and married to her current husband that she decided to continue her own education. At age 31, Tischler graduated from UT with an art history degree.

During that time, Tischler sparked an interest in jewelry making and would often make pieces for friends and family. It was not until she graduated that she seriously considered pursuing the trade for a living. Tischler established Ornamental Things in 2004.

“I’ve always been inspired by really adventurous women [and their] Bohemian, living-in-the-moment ideas,” Tischler said. “They’re not trendy, they’re unique. They have their own style.”

The jewelry from Ornamental Things can be categorized as “assembly jewelry,” where separate parts are pieced together. Tischler draws from many different sources for her pieces, from American brass manufacturers and antique dead-stock dealers to flea markets. After a few years of creating designs and executing products, Tischler started gaining success around 2007.

“For me, the first two or three years of my business were doing craft fairs and making my jewelry, seeing how the public felt about it, figuring out what my style was and what I could make and sell,” Tischler said.

Today, Tischler travels to major trade shows every year in New York, Las Vegas, Atlanta and Dallas. Her work is showcased at music festivals in Seattle and Chicago, and she has also had a booth at ACL for the past five years.

Tischler’s jewelry is also sold at retailers across the U.S., Canada and the UK, as well as online. Five employees currently work in her studio, including styling and art director Amanda George.

“Seeing Natalie work as an artist is really interesting because the sources of her inspiration are so varied,” George said. “An idea for a new style may reference a period of historical fashion, or it might be inspired by some piece of found nature picked up from Barton Springs.”

Eager to expand Ornamental Things even further, Tischler hopes to hire more employees and devote more of her time to designing, using computer programs like Illustrator and Computer-Aided Design, a 3-D modeling software used by engineers to design bridges and landscapes.

Focused on improving her successful business, Tischler’s experiences laid the basis for her business spirit.

“I remember one of the women I work with was saying that having children was really good for business,” Tischler said. “I think what she meant by that was that it really gives you a focus in your life. Having kids really makes you work harder because you want to give them a good life, so that makes you work harder in your business.”