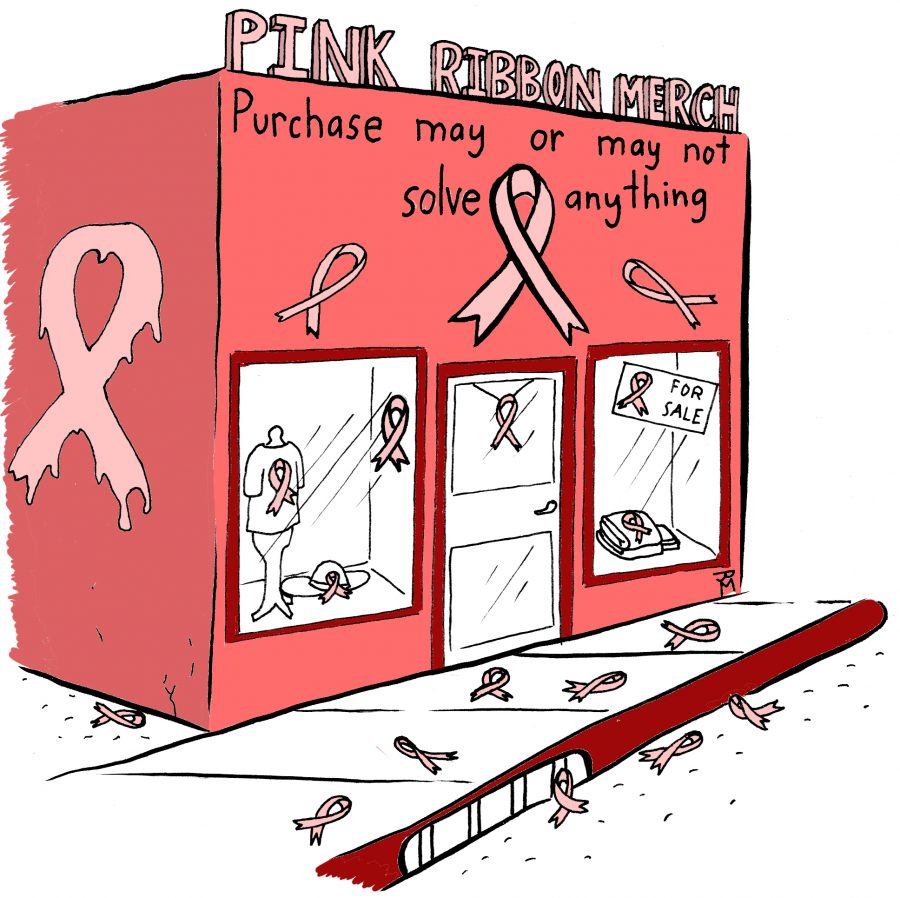 When my mother was diagnosed with breast cancer six years ago, I knew that I would never be the same — cancer has a way of changing your perspective like that.

But I never would have guessed how differently I would come to view the color pink. Over the last several years, my mother and the network of breast-cancer activists with whom she became involved after her illness have taught me to be critical of cancer awareness efforts. Just because an organization’s heart is in the right place, that doesn’t mean that we shouldn’t take a closer look — and October, National Breast Cancer Awareness month, is a good time to do so.

Every year, October brings a barrage of pink. It’s impossible to avoid the hundreds of pink-ribbon-plastered “products-for-hope” that line the shelves at H-E-B. The pink banners on campus advertising countless events being held “for a cure” are just as hard to miss.

Just this Saturday, Texas Volleyball hosted their annual “Volley For a Cure” event, with free pink manicures and complimentary “Horns for Hope” pink grocery bags going to the first 250 fans in attendance. Each year, hordes of businesses and organizations are ready and willing to support the Breast Cancer Awareness cause. But what is all of this pink really doing?

The first and most obvious issue is that it seems to be making people quite a bit of money. After all, it goes without saying that businesses stand to make a hefty profit of off their pink ribbon-adorned specialty products, which customers may snatch up more readily than regular old, non-breast-cancer curing products.  But often times, very little of this additional revenue ends up contributing to cancer research — despite what we assume when we support a “for a cure” event or buy a pink-ribbon product. As an example, consider the NFL’s “A Crucial Catch” program: Only 8.01 percent of the money that the league makes from sales of its pink merchandise actually goes to cancer research, according to a recent report from Business Insider.

In addition, the Susan G. Komen foundation — the very organization that trademarked the phrase “for the cure” — only gave 16 percent of the money that it raised in 2011 to research, according to the New York Times Magazine.

But many pink products, events and organizations don’t even make it that far. Some are marketed solely to promote “awareness,” and the company never makes any donation at all. Though the promotional materials for Saturday’s “Volley For a Cure” event said that the event aimed to “turn Gregory Gym pink,” to help “raise breast cancer awareness on our campus and in the community” it made no mention of any of the proceeds going to breast cancer research (at the time of publication, the Texan was unable to confirm whether or not any of the proceeds from the event would in fact go toward cancer research).

Granted, it’s hard to put a price tag on “awareness,” which in itself sounds like a noble goal. But below the surface, maybe awareness isn’t such a great cause after all.

Joy Simha, co-founder of the Young Survival Coalition — an organization dedicated to the unique issues of young women diagnosed with breast cancer — put it nicely when she told me that we are missing the mark on awareness.

That isn’t to say that we don’t still need to raise awareness of breast cancer: we should take extra care to raise awareness of what Simha calls “the real facts.” Echoing the controversial 2009 findings of a federally-funded task force that investigated mammography, Simha said that “early detection, no matter how early, will sometimes find cancers that were never going to kill … For others, their cancer is so aggressive that no matter how early it’s found it will not be early enough to save their lives.”

In other words, if awareness is just meant to push all women to get screened yearly for breast cancer — a procedure the evidence indicates is unnecessary and potentially harmful — awareness may be counterproductive.

And then, of course, there’s the fact that college-aged women face an extremely low risk of breast cancer to being with, making raising awareness of breast cancer among students almost counterproductive. For Simha, this is key.  “Until we truly understand which women need to be aware of breast cancer and which women do not,” Simah said, “I do not think college age women benefit greatly from awareness unless [it] convinces them to live a healthier lifestyle.” Again, the message is clear that awareness can make a difference, but we need to be realistic and critical and let science lead the way in informing our attitude about the disease.

Until we know more about this disease and how best to treat it, we need to think long and hard about breast cancer awareness initiatives. Sure, some organizers of awareness events have good intentions, and when you buy that yogurt with the pink lid, your heart is in the right place. But, as Simha said, “Do not get manipulated into buying a product or donating to a cause just because it’s breast cancer. Think critically about whether that is how you want to spend your money.” Unfortunately, at least for now, the presence of the color pink doesn’t guarantee that an event or product is truly working towards a cure.

Nikolaides is a government and Spanish senior from Cincinnati.