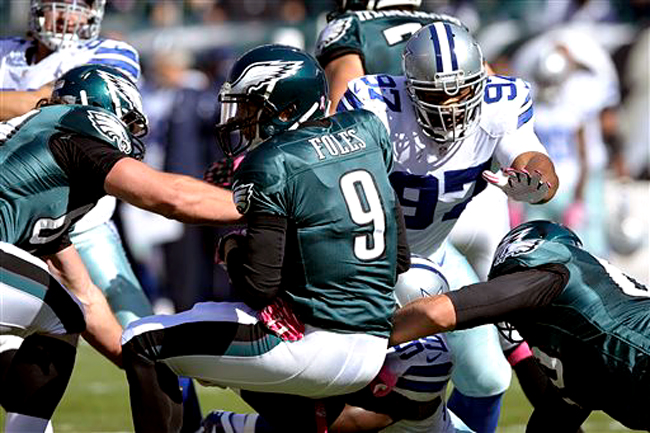 Heading into Sunday’s game against the Philadelphia Eagles, Dallas Cowboys defensive coordinator Monte Kiffin had not been known for stopping an offense run by Eagles’ head coach Chip Kelly.

In fact, the last time these two went head-to-head was just a year ago at the collegiate level, when Kelly’s Oregon Ducks scored a whopping 62 points against the University of Southern California defense led by Kiffin. USC surrendered 730 yards and nine touchdowns in that game alone, which both set school records. Moreover, in three games against Kiffin’s defense, Oregon averaged 601 total yards and never scored less than 35 points.

Sunday was a different story at Lincoln Financial Field as Kiffin’s defense gave up a mere 278 yards, and in an unforeseen defensive battle, the banged up Cowboys defeated the Eagles 17-3 to gain sole possession of first place in the NFC East.

Even without three starters on the defensive line, the Cowboys held Eagles quarterback Nick Foles to just 80 yards passing before knocking him out of the game after three quarters with a head injury. Rookie quarterback Matt Barkley played in relief but was far from effective, throwing three interceptions in three drives.

On the offensive side of the ball, quarterback Tony Romo threw for 317 yards and one touchdown in his 100th career start. Wide receiver Terrance Williams had a solid game contributing 71 receiving yards and a touchdown.

For the first time this season, the Cowboys went on the road and got a victory. While the win may have been ugly, the Cowboys will take it seeing how they have been devastated by injuries. Obviously the team has things to work on, but maybe not as many things as the rest of the division.

The most important thing to take away from this game is that the Cowboys are now 3-0 in the division for the first time since 2007, when they won the division.

The Cowboys remain on the road as they prepare to face the Detroit Lions in Week 8, a team coming off a heartbreaking loss to the Cincinnati Bengals. The last time these two teams faced each other was Dec. 9, 2007, when the Cowboys escaped with a 28-27 victory.